As up and coming "Pumpkings", Thijs de Jong and Bastiaan Blok started the cultivation of Hokkaido and Kabocha pumpkins on 0.2 hectares in the Flevopolder seven years ago. Now, seven years later, Pumpkings owns 25 hectares and the company is well on its way to conquering Europe with their pumpkins. 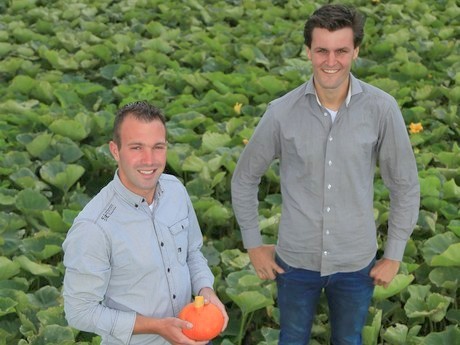 "The season is going well," says Thijs de Jong. “We have now sold around a third of our pumpkins, whilst with our longer-lasting varieties we are focusing on later delivery to the market. The prices are average, like they have been in other years. So it's going well in itself.” Many of Pumpkings' pumpkins cross the border. “We also do business domestically, but we primarily export a lot to Germany, Scandinavia and Great Britain. Our focus is on export, food service and some smaller retailers. "

Challenge
In addition to the cultivation, the Pumpkings also manage the storage, processing and sale of the pumpkins. According to Thijs, storage is the most difficult. “You determine the quality for the storage product from the early stage of growth to the harvest. With the harvest you have to make sure, for example, that they do not fall and are carefully placed in the crate, and once in storage you must ensure that the pumpkins continuously have air. The pumpkin market has grown considerably in recent years, but still not that big. The flip side is that there is little knowledge about the product. That is a real challenge, especially in the storage process. ”

Thijs notices that the use of pumpkin is becoming increasingly widespread among consumers. “A few years ago, only pumpkin soup was particularly well known, but now you see that pumpkins are increasingly being used in, for example, salads or oven dishes. The product is increasingly being used as the main ingredient in a meal. Pumpkins are healthy, with a high nutritional value and low carbohydrates, so they fit well in the current "healthy" trend. We also notice that around us. When we said seven years ago that we were pumpkin growers, people would respond with reactions like "ugh, that's gross". Now people indicate that they really like it. "

According to Thijs, the change went quite fast. “Pumpkin is a product that manages to sell itself well thanks to its taste and wide application. I therefore expect that consumption, particularly in the foreign market, will continue to grow. "

Going green
The seller seizes the moment to also promote the Kabocha pumpkin. “The orange Hokkaido is selling itself, but I don't think Kabocha gets as much attention as it deserves. This green pumpkin looks less tasty, but is actually sweeter and tastier than the Hokkaido. I therefore find it quite striking that the sale is not going so fast. With regard to market trends, I expected a few years ago that the Kabocha would grow stronger in the market than the Hokkaido. Strangely enough, that did not happen, although that can of course still change. At least we still have plenty of both available,” he concludes with a smile.