Light volumes of Chilean cherries begin entering the United States around the first week of November in light volumes. Halfway through the month, volumes begin to increase and after Thanksgiving the peak volumes start enter the market. 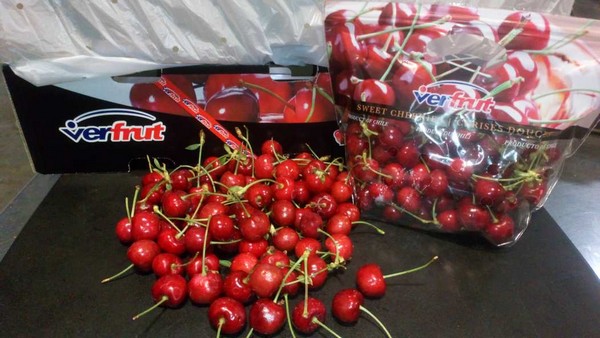 Protests in Chile cause challenges for importers
The season has only just begun, but importers have experienced some issues due to the protests. Marcial Hernandez of Pacific Trellis Fruit says: “We have definitely experienced some issues due to the protests, and it has been one of the biggest challenges in the industry this season. Last week, in week 47, our shipments didn’t arrive on the days they were supposed to. We expected shipments on Tuesday and on Friday, but they didn’t come. And then we got larger than normal volumes on the weekend. There were delays in the inspections done by the SAG – the Agriculture and Livestock Services in Chile – which caused the delays in the exports.”

Late shipment arrivals are always an inconvenience, but this time it was particularly difficult timing due to Thanksgiving, which is coming up on Thursday, November 28th. Hernandez explains: “During the week of Thanksgiving, retailers always have many sales going on because consumers are going to be preparing a big meal for the holiday. The orders for the stores would have had to been sent out to stores this past weekend, but since our product didn’t arrive until Saturday we weren’t able to get our product out in time for the sales. Whatever we didn’t sell by this past Tuesday November 26th, will likely remain in storage until the week following Thanksgiving.”

Hernandez adds: “The current situation in Chile has created some challenges for us, but fortunately, the overall impact hasn’t been too bad yet because the people in Chile are working really hard to keep things moving forward. There have been some delays, usually one to two days, but they have been working really hard to keep the impacts minimal.”

U.S. interest in cherries increased
Outside of the logistics issues, the cherry season has been going well. Hernandez says: “The season so far has been really interesting because the interest in the U.S. for cherries has been increasing and Chile has also been expanding their cherry production. Last year they had around 38-40 million boxes of product and this year the estimate is to be between 43-45 million. This number will likely end up to be a bit lower, however, due to the impact of the droughts.”

“We have been seeing for citrus growers that the drought has made it difficult for them to reach good sizes on their fruit – so they still have quantity and quality, but the overall volume is lower because the sizes are smaller. We are expecting something similar to happen with the cherries in the next month, but up until now the shipments have been steady and we haven’t experienced any issues yet.”

While the interest in cherries has been rising, the actual demand hasn’t increased much yet because the pricing remains quite high. “We see that there is more interest in the product, definitely, but that doesn’t directly translate in demand. The prices are currently too high for the interest to turn into demand – this is due to the high costs of airfreight and the high demand that is coming out of China, which takes up a lot of the product and makes it a very competitive market for the U.S. importers wanting to import the Chilean cherries.”

Sensitive pricing
The cherry prices are not stable and change quickly depending on the situation in the market. Hernandez says: "The price are also very sensitive to the supply, and when the supply rises just a bit the prices drop very quickly – and on the other side of that, if the prices go too high, the demand will drop very quickly as well. This season started with really high prices and that means that many retailers would prefer to stay away from the product until the prices stabilize”

He adds: “Argentina is also playing a very important role in the supply today, but there isn’t much information available in terms of their weekly shipments and this is not helping us to conduct the prices properly since we don’t know the exact supplies. Chile does better with this, and their export data is updated weekly and is always very accurate. They provide great support when it comes to forecasting and price projections.”

Starting to being ocean freight shipments
“We are seeing for the first time that growers are willing to send early shipments by ocean, which normally doesn’t occur until late December. This time we will have early arrivals to hit the end of the year holidays. Reports say that the first shipments will be arriving around December 10th, so the volumes in the market will likely increase a bit during that time. It still won’t be very much – we are seeing that many retailers want the product in their stores, but they aren’t ordering it in high volumes, usually no more than 4-5 pallets. We are expecting that in the years to come the interest we see now will turn into solid demand,” Hernandez concludes.