Trade
In 2018/19, Chile’s fresh apple exports decreased by 10 percent in volume and 8.4 percent in value over 2017/18 totaling 618,324 tons and $557 million respectively (data until August). Chilean apple exports are diversified and reach markets in North America, Latin America, Europe and the Far East. 2018/19 data ranked the United States as the top market for Chilean apples followed by Colombia, India and Taiwan. In 2018/19, Chilean fresh apple exports to the United States increased by 26.21 percent over 2017/18. 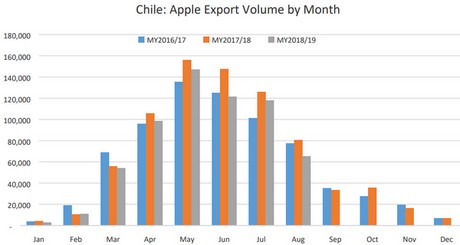 Apple exports to China, Taiwan, India, and Vietnam are expected to increase in the following marketing years as exporters focus their efforts on these Eastern markets seeking for high prices. Monthly export data shows a decrease in exports in 2018/19 during Chile’s peak export season, which ranges from March to August (See Graph). In 2018/19, post projects a 9.5 percent decrease over 2017/19 fresh apple exports, totalling 705,000 tons. For 2019/20, Post estimates a seven percent decrease in apple exports over 2018/19, totaling 656,650 tons.