"Up to now, the 2019 avocado market has been the opposite of what it was in 2018," states Elena Rogojnikova of the Dutch company, Hagé International. "In 2018, there was an enormous oversupply of Hass avocados. These came from South Africa and Peru. This was the case from the summer until October. These surpluses resulted in very low prices on the market."

"This year, there is actually a shortage of Hass avocados. This is partly due to the market in the United States. There are better prices for this product in that country. These good prices are ensuring that a lot of volume from Peru and Mexico is being sent to the US instead of to Europe." 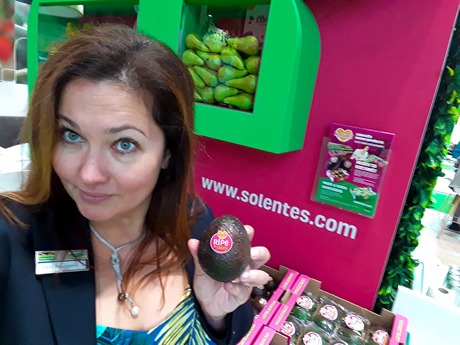 "There is a significant shortage of the common large 12 to 20 sizes. This is making for very high prices. This market situation is precisely the opposite with baby Hass avocados. These come mainly from Columbia and Chile. There are more than enough of these sizes," says Elena.

"Peru is the largest avocado export country in South America. This year's volume of Hass avocados from this country is smaller than last year. This has to do with the so-called on and off years. Last year was an on-year with a large avocado crop. That means 2019 is an off-year with somewhat fewer avocados."

"South Africa's Hass avocado harvest is also smaller this year. It is about 30% lower than last year. The drought in Chile has ensured a reduction of 25% in this season's avocado production in that country. It is also making for smaller sizes. Harvesting there is also becoming more problematic in terms of logistics. These issues are due to the unrest in that country."

Spain has started with its first Hass avocados of the season. Slightly fewer avocados are expected from this country this year. Israel will begin with Hass avocados in the first weeks of December," says Elena. "The South African Greenskins avocado season was stable. There were ample supplies and with almost no quality issues. That season did, however, end a little sooner than usual."

"The Israeli season started in September with Galil avocados. These were followed by the Ettinger variety. There were somewhat lower volumes of these. This resulted in stable, higher prices. The quality of avocados from Israel is constantly good. There are hardly any problems with these. In December, we expect Arads and Pinkertons. The Spanish Bacon season is almost over. The first Feurte from Spain are already on the market. Prices for these are also on a reasonably good level," concludes the importer.