"We want to become a hub for Moroccan tomatoes"

At Vegimex in Poeldijk, the export season of the round Moroccan tomatoes has kicked off. "Due to the local market in Morocco that is doing very well, we have started exporting a month later than initially expected. We are really looking forward to bringing our tomatoes to the European market. The quality from Morocco is good this year and the prices are on average a lot higher than last year," says Robbert de Mie.

Next month, the season will be supplemented with cherry tomatoes, peppers and broad beans from Morocco. Besides the tomatoes and peppers, Vegimex has its own cultivation of watermelons and oranges. In addition, the company cooperates with local growers. "In total, we now have around 70 hectares of greenhouses. We now receive weekly supplies out of our own crops," says Robbert.

"Our focus is on quality and freshness. We want our customers to be able to work with our products for a long time. Only when our customer is happy, can we be satisfied with our work," says Robbert. The company has relationships with the growers in Morocco for many years. All trade, including partners elsewhere in Morocco, is certified and strictly inspected before shipment.

“Most Dutch wholesalers buy their Moroccan tomatoes in Perpignan. We do see Perpignan has set the bar for European trade because there aren't many direct lines between the Netherlands and Morocco. We take advantage of this, the transit time is a lot shorter and there are no intermediaries who can disrupt the cooling process, which ultimately benefits the quality and certainly the price. The tomato is such a sensitive product, you really have to want to control the entire process from cultivation to the consumer," says Robbert. 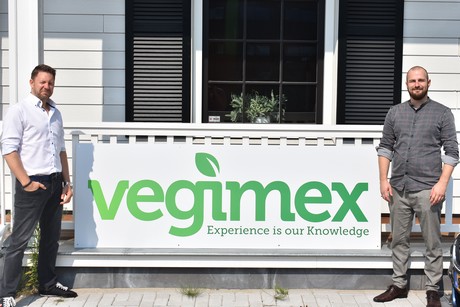 “In fact, you can say that we want to become a kind of Dutch version of Perpignan. We want people to know that they should go to Vegimex in Poeldijk for fresh Moroccan tomatoes." Robbert concludes, enthusiastically.