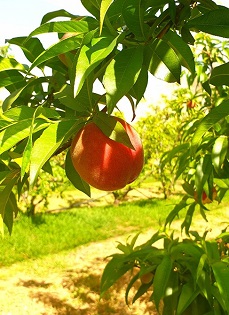 South Africa’s earliest plums and apricots, and organic at that, are ripening fast in the orchards of Pro-Plum (part of the OrganoGroup) near Mookgophong, Limpopo Province, along with the organic peaches and nectarines whose harvest started two weeks ago. Their apricot harvest will start next week.

Their organic stone fruit crop is marketed exclusively by OTC in Europe and North America (Canada is a very strong market).

“Early in the season there is a bit of a price premium on organic stone fruit, but it’s still very much in line with conventional fruit. Where it differs is that whereas larger volumes of conventional fruit start coming in as the season progresses and prices drop, the price for organic remains more stable,” Paul explains. “The price for an organic product is already very high, and some are flown out, so there can’t be too much of a premium on top of that. Where we actually save compared to conventional is on packaging. Where conventional would use, say, a 750g punnet we use a 600g punnet.”

The OrganoGroup is a regular at Biofach and Fruit Logistica Berlin, and will attend the International Perishables Expo in Dubai next month, assessing the opportunities for them in the Middle East. 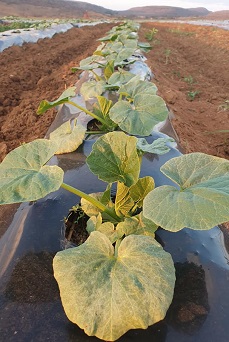 The sweet potato export season started in June (a fully organic harvest this year; last year’s transition-to-organic crop of sweet potatoes for retail was met very favourably in Europe) and Kuri pumpkins, destined for the coming European winter, have been planted.

The OrganoGroup is aiming for 50 containers (a thousand tonnes) of sweet potato this season and 30 containers of Kuri pumpkins (pictured right) to meet their European commitments.

“We’ve gone lock, stock and barrel into organic vegetable production,” says Paul Roos Sr, who goes by the motto that an organic farmer needs to approach farming even more scientifically than a conventional farmer.

Domestically, they’ve also moved strongly into the organic vegetable sector with the support of Woolworth’s technical staff. OrganoGroup has been opening many lines of organic produce for the top-end retailer (beetroot, cabbage, sweetcorn, zucchini, spinach, carrots), trialling greens, tomatoes and cucumbers to add to those lines in future. They’re also getting closer to organic success with broccoli, notoriously difficult to produce without pesticides. 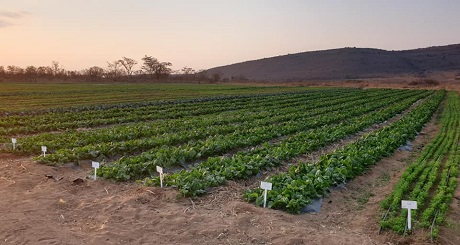 Earliest apples in the country
Their organic apples of the locally-bred Afri cultivar range come in during the first week of December. So short is the local market then on apples that, apart from an organic apple line for Woolworths, they also sell the apples as conventional to other retail groups. By that time apples that have been in CA rooms for nine months are expensive and freshly-harvested apples easily compete on quality.

“There’s a lot of pressure on stone fruit producers in the north of the country,” says Paul. “The Cape season is starting earlier all the time and in the north we face more risks, like hail or cold damage during flowering because our trees flower so early or summer rainfall during harvest – although that’s no problem at the moment. In fact, it’s terribly dry in our area. We have sufficient water in our dams to get us through the season but some producers in the area aren’t able to irrigate optimally at the moment, they’re just keeping trees alive.”