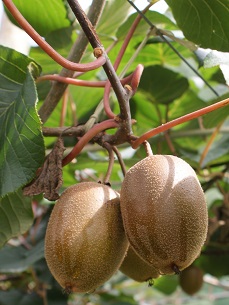 Yellow kiwis from South Africa have a six week window before fruit from New Zealand or Chile are sent to market. This year the campaign had an attenuated end as New Zealand came into the market quicker than expected, but the yellow kiwi industry is pleased with a season during which a number of containers were exported.

“Our yellow Soreli kiwis arrived at a good time and they were well received. We tested destinations in the Far East, Middle East and Europe,” says Peter Turner, managing director of Variety Innovation BV, which holds the license for the Soreli kiwi. He notes that the industry is getting to grips with the fruit, which differs substantially from the well-known green Hayward.

“We’re going through the process of developing protocols for picking and handling, production techniques and better postharvest technology.”

At Magoebaskloof (Limpopo) and White River (Mpumalanga) kiwis are produced at latitudes much closer to the equator than elsewhere in the Southern Hemisphere, giving early maturing kiwifruit – exactly the USP the South African industry is aiming at – but also experiencing much warmer summer conditions as the fruit matures.

Peter Turner thinks Soreli kiwi could do well elsewhere too, such as in KwaZulu-Natal Midlands, Grabouw and Waboomskraal, north of George, and in parts of the Langkloof that have a maritime climate. Trials in these areas are providing exciting results, he says. 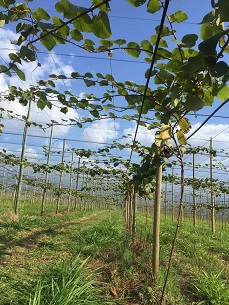 “Uneven bud break results in some fruit at harvest being 15 or 20 days behind others, differing in maturity which is difficult to detect in a brownskinned fruit. This leaves producers with Hobson’s choice: they struggle to find a good median value when testing for ripening, so some fruit is too mature and soften quickly, while others are immature.”

Trial blocks have been established in these areas with new cultivars – and in particular, pollinators and female plants whose flowering times dovetail precisely – and early outcomes are very exciting, he says, favourably impressing visiting international kiwi experts.

“The point is we’re trying to give a realistic response to growers keen on yellow kiwis. We can help farmers fit a 'round peg into a round hole', but only if their area is right. The first thing I tell prospective growers is to get the weather data for the past 40 years for their area to check whether the chilling units and summer humidity are suitable.”

In the George area, where there is currently strong avocado expansion, there could be an overlap in the area suitable for both avocados and kiwifruit, and production of both is possible, although kiwis can take frost (but not during flowering) whereas avocados can’t.

In an apple area like Grabouw there is good potential for yellow-fleshed kiwis with lower chilling requirements than Hayward kiwis, he believes, but apple farmers wouldn’t be considering removing well-performing orchards for kiwis as many growers recall their bad experiences with establishing green kiwis in the 1980s. (Although, Peter points out, in New Zealand, a well-run golden kiwi orchard with good tonnage outperforms top apple orchards in terms of returns.)

Kiwis lend themselves more easily to organic production
Kiwi management costs per hectare are less than apples because of lower spraying costs (and Psa is not present in South Africa). “You can easily farm kiwis organically compared with apples. They have fewer fungal issues and minimal insect pressure. Three of the 22 yellow kiwi farmers in our group are already producing organic kiwis.”