Texas peach growers began harvesting last week as the season began positively. The crop is set to be a good one after generally favorable conditions throughout the growing season and also the bloom. The peach growing district in Texas experienced a relatively wet winter, which has helped to bring about a solid fruit set. A cold spell in March fortunately did not result in any major damage.

"We started our harvest last week and have a strong crop this year again, despite the late severe cold in early March," shared Jamey Vogel of Vogel Orchard near Fredericksburg. "Overall, it's been a good winter with plenty of chill hours and wet conditions which began in fall and lasted throughout the winter. After an excellent bloom, we are seeing a very nice fruit set." 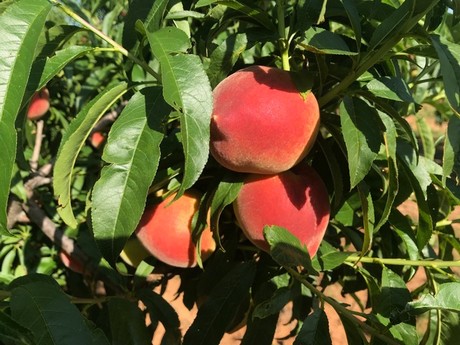 "In early March, we experienced a very strong cold spell," he continued. "Night time temperatures dipped into the low 20s for a couple of days. Normally, that would be disastrous, but the buds were either still pink or the blooms were very tight which helped to protect the trees. Additionally, a few days prior to the cold spell, we had two to three inches of rain which kept the humidity up, further lessening any harm. In the end, we had a little bit of damage but retained 90 percent of the crop."

Mid season varieties will be especially strong
Because of that cold spell in March, any minor damage was mostly felt by the early season fruit. As a result, the front part of the season is expected to be a little lighter than the middle and end. All things considered, growers are predicting this to be a good year, which follows on from last year's crop. 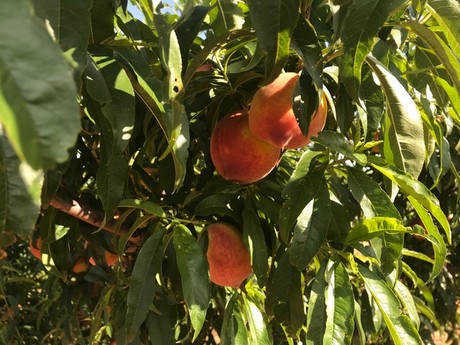 "We had to do quite a bit of thinning during this season," Vogel observed. "In 2017 we had a very light crop and 2018 was a good crop overall. This year, we are expecting another strong year especially on all the freestone varieties which will start in mid June and peak during the month of July. As a result, this middle part of the season should be very strong."

Strong local industry
Texas is subject to variable winters and as such does not have a large presence on the wider peach market. This is because a strong, consistent crop is not guaranteed. However, locally, the industry is strong with Texas peaches popular in stores around the region. The U-pick model is not as ubiquitous as in other states that tend to have a larger fruit tourism presence, however Vogel noted that the local produce industry as a whole is performing well. 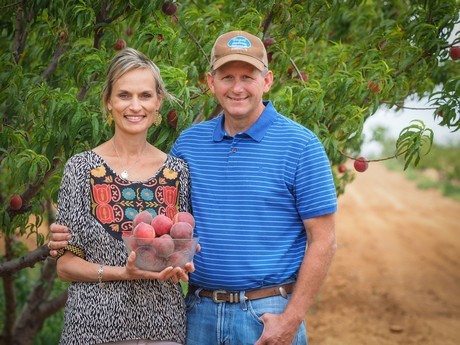 Jamey Vogel and his wife, Terri

"Peaches have a strong local presence in Texas and this stems from the high quality fruit that is produced," he said. "We sell most of our crop through retail, as well as to fruit stands and local markets. We are also now seeing a burgeoning tourism industry which, along with the fine wineries in the area, is boosting the local produce industry. Some of the more popular peach varieties we offer include the Loring, Dixiland, Red Globe, Harvester, and the Cary Mac, to name a few. Redskin and the Ruston Red are examples of some of the other more popular varieties."