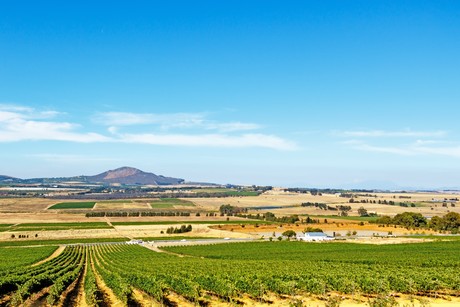 Slightly less than half the South African export is focused on Europe. With nearly 20 per cent, the Netherlands is their most important buyer, followed by the UK with more than 10 per cent. China (including Hong Kong) comes third with 8 per cent and Russia is their fourth buyer with 6 per cent of the total.

The South African export of fresh fruit has continued to rise in recent years. According to figures of the South African tax authorities / Customs (SARS), the increase of export to EU countries, including the Netherlands, has practically come to a standstill. In 2018, SARS registered an export of fresh fruit to the Netherlands of 708,000 tonnes, just a fraction more than in 2017.

The UK is the second major buyer of South African fruit. According to SARS, this concerned 425,000 tonnes last year. This is quite a bit less than in 2017, but that decrease can be entirely attributed to the much smaller export of apples.

According to SARS data, growth markets were mostly China, Portugal, Canada, Bangladesh, the US, Iraq and Qatar, in 2018 as well.

EU still the most important buyer
The EU remains the most important (direct) sales market, with a volume of 1.52 million tonnes in 2018. This was practically the same as in 2017, but more than in previous years. Compared to 2010, South Africa exported a quarter (more than 300,000 tonnes) more to the EU.

The import figures for South African fruit in the EU are always a bit different from those of SARS. The trend has been the same in 2010-2018: +25%. According to Eurostat, the amounts are slightly smaller than according to SARS. This was mostly the case in 2017, the difference was less significant in 2018.

More to Asia
Asia is on the rise as a buyer of South African fruit. In 2018, 1.17 million tonnes was shipped to that continent. That was 6 per cent more than in 2017, and more than 60 per cent more than in 2010. China in particular is on the rise. Last year, (direct) export to that country increased by 70 per cent, to 180,000 tonnes. An additional 130,000 tonnes was shipped to Hong Kong. The products sent to China and Hong Kong are citrus, grapes and top fruit. Avocados are not shipped there because of the import ban.

Russia is also an important buyer of South African fruit, although sales to this country have fluctuated around levels of 210,000 to 240,000 tonnes for years. It was much less in 2016. Last year, it concerned 226,000 tonnes. Oranges are the most important product, followed by pears, tangerines and grapefruit.

More than one million tonnes of oranges
With a third of the total, oranges are the most important export product by far. In 2018, the limit of 1.2 million tonnes was surpassed for the first time. The Netherlands is the most important buyer. With an excess of more than 40 per cent, China was the second-largest buyer last year. They are followed by Russia, Saudi Arabia and the United Arab Emirates. A remarkably large number of South African oranges are sent to Portugal as well. Compared to other products, relatively few South African oranges are sent to the UK. South Africa exports fair amounts of oranges to many other countries.

Europe less and less important for apples
The export of South African apples dropped considerably (-20%) to a level of 450,000 tonnes in 2018. The UK is the country’s most important sales market. In 2018, export to the UK was nearly halved: from 153,000 tonnes to 83,000 tonnes. However, Eurostat’s figures don’t confirm this decline. It’s surprising that export to the Netherlands increased considerably at that time: from 15,000 to 21,000 tonnes, although this is a modest amount considering the total import is around 3,000,000 tonnes. However, export also dropped, sometimes considerably, to a number of other important buyers.

South African apples are often sent to non-European countries. In Asia, Malaysia and Bangladesh are important markets, and a lot of apples are sent to African countries as well.

For South African pears, the Netherlands is the most important market, followed by Russia and the United Arab Emirates. Export to the Netherlands represents nearly 20 per cent of the total. Of the Dutch pear import, a quarter comes from South Africa.

A lot of grapes to Europe
With a share of more than 40 per cent, the Netherlands is a crucial buyer of South African grapes. Of the Dutch import of grapes, a third comes from South Africa. In January and February this concerns about 60 per cent. A lot of grapes are sent to the UK and Germany as well.

A lot of avocados
In 2017, the South African avocado export experienced quite a slump: 38,000 tonnes. In 2018, the export recovered, and with nearly 80,000 tonnes it was even larger than before. South African avocados cannot be sent to China as yet. It’s therefore not surprising that 2 out of 3 exported avocados were sent to the Netherlands last year. South Africa’s share in the Dutch import avocados was 14 per cent in 2018. The share is about 20 per cent from May to September.

Click here for the factsheet South Afrika (in Dutch)