When it comes to produce that takes the spotlight on Valentine’s Day, there are the usual reddish suspects—think watermelon radishes, beets and of course… strawberries.

But, thanks to increasing domestic availability and the influence of the high-end restaurant scene, there are more and more unique items being featured on today’s Valentine’s Day plates says Gabrielle Amette of Bronx, NY-based Baldor Specialty Foods. “Chicories are a good example of this. Last year, they were all over trendy food publications and in high-end retailers in larger cities,” says Amette, adding that foodservice makes up the bulk of the consumption trends on these new products—particularly mid to fine dining establishments. “Now there are more and more domestic growers mastering the Italian techniques.”

Here are some unique items that can be found on plates this February 14th.

Red chicories
“These are very popular right now and I feel both the domestic and Italian chicories have helped push that,” says Amette, noting that the red chicories hail from Italy’s North Eastern Veneto region. This includes items such as Red Endive or Rosa di Gorizia, which is beautiful dark red small head chicory. 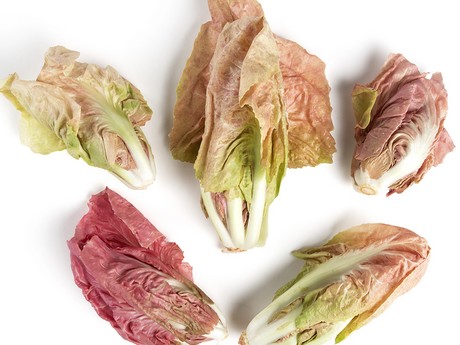 Radicchio del Veneto can be found on Valentine's Day plates.

“The pink chicories are also very popular. We import one, Radicchio del Veneto, but domestic growers have started picking up on these techniques and producing them here,” says Amette. “Some small farms were doing it last year and this year one of our bigger farms partners is growing it out in California.”

Sienna red baby kale
“This kale has been gaining a lot of momentum,” says Amette. The small leaves are burgundy tinted and can also help add color to a plate. This kale is grown domestically in Florida, though it’s currently gapping in supplies.

Pink Oyster Mushrooms
“We’ve just received our first shipment of the year of these and while they don’t hold their color when they’re cooked, they read nicely on a menu,” says Amette. Domestically, these mushrooms are grown in Rhode Island.

Blood oranges
These newer hybrid varieties of blood oranges are available out of California. “We’ve been getting some great hybrids. One of them is the Ruby Tango Mandarin and that’s a Blood Orange Clementine hybrid that has this really beautiful pink red to it,” says Amette, adding that an older hybrid, the Moro Blood Oranges, is also popular. 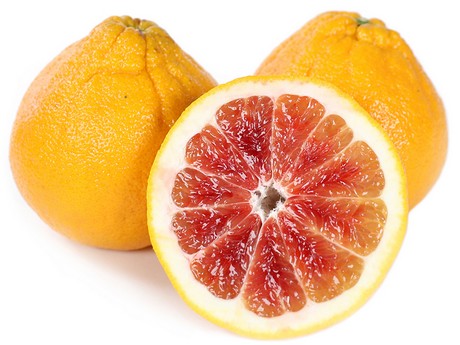 Pomelo's red pink blush make it a popular item with chefs for Feb. 14.

Red Globe pomelo
“This is also called the Valentine’s Pomelo and this is cross between a Siamese Sweet Pomelo and a Mandarin-Blood Orange hybrid,” she says, noting these also hail from California. “It’s got a really vibrant reddish pink blush.”