Mushroom suppliers are in the midst of their busiest time of the year. Demand is high and supplies are barely keeping up, resulting in a rather active market. Growers say this is a typical pattern every year as the fall season brings the dual factors of cooler weather and Holidays, both of which drive mushroom demand higher.

"Between now and Christmas, there is never enough supply and it's just beginning to tighten up now," noted David Barnes of Mountain Meadow Mushroom Farms in California. "Although supplies out of southern California are steady year-round, demand is less during summer when people tend to eat other fruits and vegetables that are in season at that time of year."

As the Holiday season approaches, Barnes added that growers tend to adjust what mushroom varieties they cultivate in order to meet specific demand for the season. "At this time of year, there is a greater demand for Crimini mushrooms," he said. "While the white, or button, mushroom is still the largest volume mushroom grown, Crimini mushrooms see an increase in volume for the Holidays when consumers use them for cooking in fall dishes."

Maitake mushroom seeing big increase in popularity
Mountain Meadow Mushroom Farms grows all the common varieties of mushrooms that are widely available. Aside from the white and Crimini, these include Buttin, Shiitake and Oyster, with their partner growers cultivating, Enoki, Portabello and Maitake. The Maitake is a variety that the company notes has seen a significant rise in popularity over the last few years. They grow in clusters and one of the reasons for the increase in demand is for its health properties.

"Out of all the mushroom varieties, Maitake is seeing the biggest increase in demand," Barnes observed. "It's mainly used for cooking due to its robust flavor, as well as for its medicinal properties. It's mainly home cooks that use them as opposed to restaurants. We have seen a sharp rise in demand over the last three to four years, although it still makes up only a small portion of total sales."

Costs and labor remain biggest challenge
In general, the mushroom market in California is quite stable and prices are not bad. However, as is the case for almost all growers, the costs of running the business, especially when it comes to labor, is proving to be a major challenge. Barnes also feels that because each state sets its own laws regarding labor, California growers are at a disadvantage. 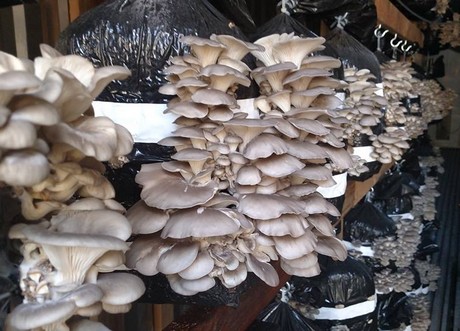 "It's a good time of year because the market generally goes up in early fall and holds steady throughout the holiday season," he noted. "However, it is not keeping up with the costs associated with growing produce. This is especially so in California where the minimum wage is one of the highest in the country, approaching $15 per hour soon. It's definitely our biggest challenge, one that is made worse because we're not on a level playing field when other surrounding states have much lower wage and other costs."

On the positive side, mushrooms are enjoying good demand right now, and there is the possibility of other varieties becoming available soon. "I've spoken with one grower who is trying to grow what he calls a 'Milky Mushroom'," Barnes shared. "We are hoping this can be another exciting variety we can offer consumers in the future."