Brussels sprouts demand set to increase ahead of Thanksgiving

As the Northern hemisphere winter approaches, many of the vegetable crops that thrive in California during the summer transition southwards into the Southwest and Mexico. It is now Brussels sprouts' turn for the bulk of production to steadily move south away from the northern coastal California growing regions. By the end of December, the majority of production will be out of Mexico while California production is expected to remain strong through Spring.

"Our Brussels sprouts are currently coming out of Watsonville and other North Coast California growing areas," said Kelly Daniels of 4Earth Farms based in Los Angeles. "Product will soon be transitioning to Mexico. It has already started to trickle in but by mid-November, we expect to see our Mexico volume pick up. Supplies are steady and it looks to be a good holiday season. Fortunately, none of the hurricanes have affected our Brussels sprouts supply in Mexico." 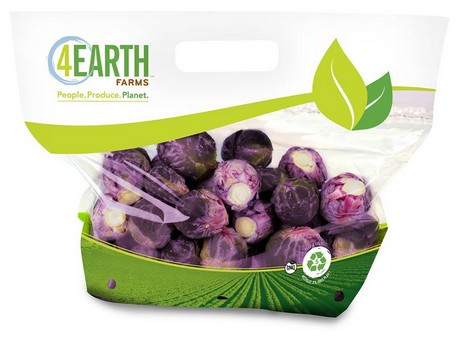 "November is a high demand season for Brussels sprouts and we are expecting to see orders increase significantly starting early in the month," he said. "Over the last few weeks, the market has been sluggish but it is getting stronger now. It should further improve as Thanksgiving approaches. After Thanksgiving, there is typically a lull before it climbs again just before Christmas. 4Earth Farms does bulk as well as retail packs and we also supply seasonal items like the Brussels sprouts stalks."

"We had an excellent season last year for the purple Brussels sprouts," Daniels shared. "This year we have increased our acreage and therefore will have greater availability."

The company offers Brussels sprouts in a variety of retail, private label, club pack, and bulk configurations, but Daniels noted that the 1lb pack variants are requested the most. "4Earth Farms does a pillow pack, as well as a mesh bag, which are the main package options," he said. "We also have clamshells and top-seal packaging options available. These are available in both conventional and organic."