Farms and Senasa offices come under direct attack in Peru

Harvesting and packing forced to standstill in Ica, Peru due to violent farm invasions

The riots in Peru have now sadly spread to farms and critical government inspection services, with direct violent attacks by masked people who forcefully entered at least five mango, table grape, asparagus and other major export crop farms, forcing them to shut down this week. The latest action places the multibillion Peruvian fruit export trade, which is in the peak of their harvesting seasons, at further risk, warns the representative body of Peruvian agriculture. 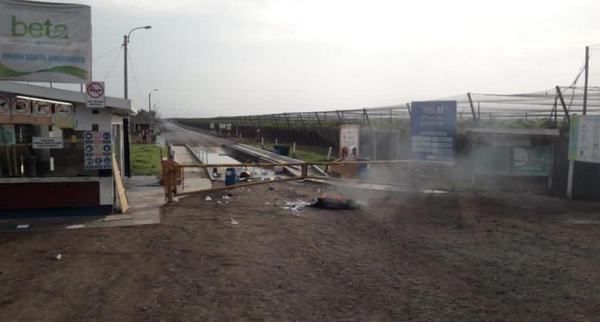 The government inspection services Senasa head offices in Puno have also been attacked by protestors. In Santiago rioters entered two farms, burned security booths and urged workers to join the protests. Most of the attacks took place this week in the major production area of Ica. Harvesting and packing at a lot of Ica’s 200 farms are paused, cold stores are said to be at full capacity, while trucks are breaking down and exports severely hampered by ongoing roadblocks.

The Association of Agricultural Producers Guilds of Peru (Agap) estimate about $200 million in losses in the Ica, Arequipa and La Libertad regions alone.

The popular Machu Picchu tourist attraction has already been closed indefinitely with protestors seemingly going after every functional part of the country to apply pressure on the President Dina Boluarte to resign and Congress to step down and bring reforms. The death toll has climbed to nearly 60 people. The Peruvian President continues to invite protestors to peaceful dialogue. She issued a new statement and live television address to call for peace and order.

One company issued the following statement: "We regret to inform you that we are forced to suspend our clean harvest and fruit packaging work from Tuesday, January 24 of this year.”

Another blueberry grower commented: “Yesterday was a tough day in Ica especially in some grape and asparagus farms. We are so far ok and all that we had last week could be sent to the port and airports.  It shall improve because the protesters are also been affected by their own economy without jobs. These actions will by far not prevent us to continue generating employment and continue operations for harvesting, process and exporting to supply the world with our fruits.”

In response to the attacks at facilities of the National Agrarian Health Service (Senasa) in the Puno region and farms in Ica, the Ministry of Agrarian Development and Irrigation (Midagri) issued this statement. “We express our absolute rejection and condemnation of the acts of violence committed by vandals against public and private facilities in the agricultural sector, which has caused the stoppage of control actions by Senasa, as well as the interruption of agricultural activity and the consequent negative impact on the economy of thousands of agricultural workers.”

“The agro-export activity represents one of the main sources of creation of thousands of direct and indirect formal jobs in agriculture, as well as a generator of foreign currency for the country. For this reason, Midagri ratifies the firm and unwavering will of the Government to promote social dialogue in addressing the country's problems, within a climate of peace and harmony. Finally, we wish to invoke the community once again to express their claims without violence, in respect for human life and public and private property and the rights of all Peruvians.”

Agap, an umbrella body that represents the Peruvian agriculture industry, has consistently called for peace and for their President to effectively use the police and army to quell the unrest within the confines of the law. They also urge fellow citizens to consider their actions and the damage it is causing the country and the negative impact on the livelihoods of millions.