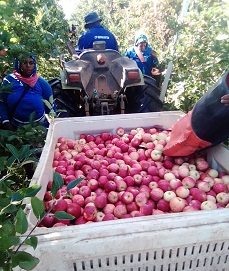 At the start of the season they focus on the local market which is empty of new season apples.

“We are busy picking Royal Gala which make up about 35% of our total crop and we will pack it until week 8. We are fortunate with a decent crop, especially after a record production season last year,” he says.

“There is a good demand for fresh, new season apples on the local market.”

The Top Red/Starking harvest is next, picking from week 7, a cultivar that does particularly well on the local market.

“We send on average about 30% of our crop to export markets in the UK, Middle East, Far East and Africa.”

He remarks that on the export front, there is a lot of interest from India.

New Gala strains
Doug continues: “New genetic strains of Gala, like Big Bucks and Bingo, are coming into decent production on higher intensity orchards of 2,500 trees per ha which is helping our total yield.”

The rain has been a challenge from a crop protection point of view but, he observes, with apples being above ground and on a permanently rooted structure, their apples have been in a much better position than some of their other crops like potatoes, beans, maize and wheat.

“Fortunately, we have escaped any major hail storms and the netting structure has provided the necessary cover (excuse the pun) for what we did have.”