US potato sales up almost 18% over last year

US potato sales rose almost 18% this year compared to last year, according to a report from Potatoes USA. Total sales for all forms of potatoes – fresh, frozen, canned and so forth – were nearly $4 billion in July-September 2022, an increase of 17.8% over July-September 2021.

Among fresh potatoes, dollar sales were up for all types, except fingerling and purple, due to tight supply, the report said. The biggest decreases in volume sales for the July-September 2022 time frame were purple potatoes, fingerlings, and white potatoes, down 38.5%, 14.9%, and 13.2%, respectively. 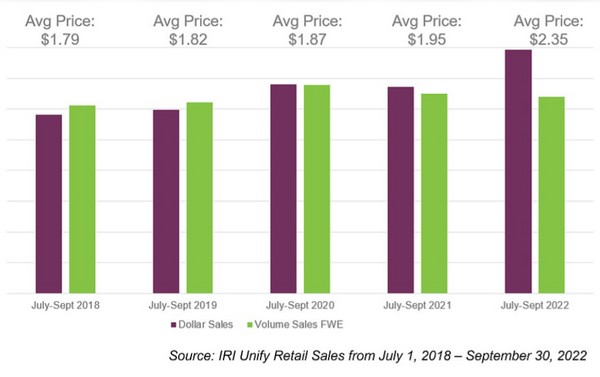 All pack sizes saw an increase in dollars, except packages greater than 10 pounds, which decreased by 27.3%. The pack sizes that grew the most were five-pound and 10-pound packs, increasing by 29.4% and 29.3%, respectively. Volume sales of all pack sizes were down except for pack two- to four-pounds and five-pound bags.

The average consumer price per pound has risen every year for the last five years, the report said, peaking at $2.35 this year.