Strawberry supplies are starting to come out of Florida. Bova Fresh is just beginning its program with bare root plants, though Bova’s Robert Wilhelm notes that some plug plant programs are going in Florida. “We’re a few weeks away from any real volume. We have another farm coming online on the 15th so we’ll probably start seeing a bit better volume that week.”

This fall’s Hurricane Ian contributed somewhat to delaying planting. Wilhelm notes its southern farm for example won’t begin picking until December 15th, so two weeks delayed. However all other plantings made it into the ground on time and generally, weather-permitting, strawberries will ship from Florida until the end of March.

At the same time, Mexico looks to have ramped up its volume of strawberries shipping into the U.S. “There was quite a substantial increase in shipments in the past couple of days coming from Central Mexico. That’s going to help feed the pipeline a bit and bring this market down somewhat,” says Wilhelm, adding that Bova Fresh itself has also significantly increased its acreage on strawberries this year so it’s anticipating a strong season with greater volumes. 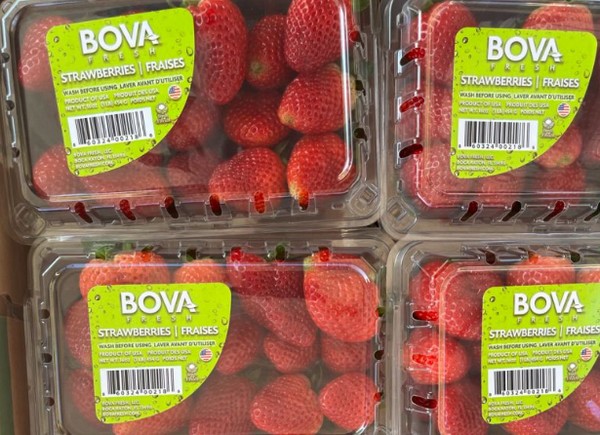 That said, prices are strong with markets between $35-$40 this week on strawberries and $30 out of Texas with Mexican fruit. Normally when Florida starts, pricing is between $24.90-$28.90. “However some of the terminal markets were getting as high as $45-$50. Raspberries have been cheap so they’ve included some raspberries. But just this week we’ve started to see a bit of pushback on that pricing,” he says.

He also anticipates those prices will start to cool as early as next week. “They’ll slowly come down and get into the $20s. I think you’ll see Mexico in the low to mid $20s and Florida will be in the mid to high $20s as well,” says Wilhelm.