Supplies of pomegranates are up this year out of California. “There is a good supply of smaller sizes of pomegranates--that seems to be the trend this year,” says Ray England of DJ Forry. “The larger sizes, the 22s and up, were well off the last five-year average so they are peaking on 26s and 30s. This started with the early varieties and carried on through the Wonderful fruit.”

This is a marked difference from the 2021 short crop of pomegranates. In 2021, the first day of harvest for many growers saw a sizeable windstorm usher in which took a toll on the fruit from a condition standpoint. “Then towards the latter part of October there was a lot of rain and it made it almost impossible for some growers to get into the fields,” says England. Between those two events, volume was down in 2021 and while it has rebounded this year, it’s been more so on that smaller-sized fruit.

Growers this year also started approximately a week later than last year. England notes harvest typically starts October 11-14 and this year it started with one grower on October 17 while the rest began a week later. Shipments will continue through the middle to the latter part of December. 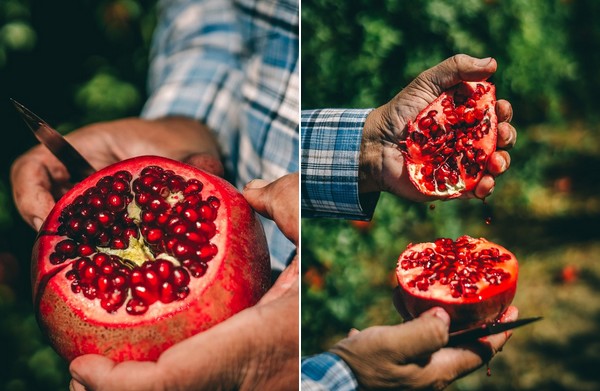 Domestic product only
Supplies of pomegranates are just domestic at the moment with Chilean imported pomegranates expected in May.

Meanwhile, demand is strong for the fruit. “It has been pretty good, even with all of the inflation. It has also been relatively stable compared to last year and the previous years and it could be because it really is highly seasonal,” says England. “A lot of places in the country do not bring in Chilean fruit so it’s a commodity that hasn’t been seen in six months so people respond to it.”

As for pricing, typically FOBs are not as strong on small fruit. “The 22-count is in most demand and commands the highest FOB,” says England. “Even though there are more 30s and 34s, that pricing is pretty consistent with last year’s pricing--even with the shorter crop in 2021.”