Italian pears of the varieties Abate Fetel and Santa Maria predominated, followed in importance by Turkish Santa Maria, which, however, played a greater role, in Munich in particular. German Conference and Alexander Lucas as well as Dutch Gute Luise had a rather complementary character. The quality of domestic Xenia in Frankfurt was not as good as in the previous year. 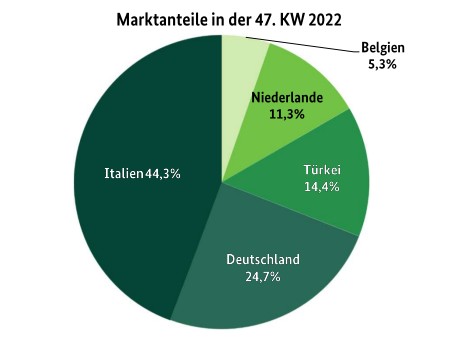 In Munich, they became cheaper as a result of a too slow turnover. Vereindechants had convincing organoleptic properties. Sales were relatively quiet. Demand was satisfied without difficulty. Stable prices were the order of the day. The first South African imports, Williams Christ, should be available in the next few weeks.

Small citrus
In general, the autumn weather certainly improved sales opportunities, and demand had increased. Due to different types of presentation, a wide price range was established.

Apples
The product range had not changed significantly. Supply and demand were sufficiently balanced. Prices therefore mostly remained at their previous levels.

Table grapes
Italian offers dominated the scene. Turkish Sultana lost some of their presence, but were still convincing in terms of quality and could generally be sold quickly.

Oranges
The presence of Spanish batches increased, that of South African batches decreased. The week was characterized by unexciting sales. Demand was not particularly strong and it was easily satisfied.

Lemons
Spanish and Turkish shipments largely divided the business between themselves. There were only isolated deliveries from Italy, Greece and Egypt.

Lettuce
Iceberg lettuce came almost exclusively from Spain. Its quality had improved. However, as availability had also expanded noticeably, marketers were unable to capitalize on this and increase prices.

Cucumbers
Spanish cucumbers apparently predominated in the market. Overall, demand was satisfied without difficulty. Prices did not change significantly.

Tomatoes
Demand was not particularly strong. Prices did not show a clear line: however, reductions were more frequent than increases.

Sweet peppers
Spanish imports dominated the action. Turkish imports followed in terms of volume. Moroccan and Dutch deliveries followed, but overall these were only of a supplementary nature.