The development of box fillers has increased dramatically in recent years. Wevano's new box filler and (de)stacker takes a lot of work off your hands, adds to a calm workplace, and is product-friendly. 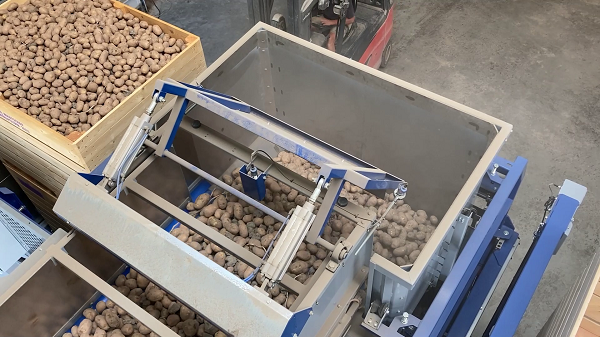 The buffer bunker serves as a fall breaker and drops to just under the conveyor belt, thus minimizing the fall height

In the Netherlands, the agricultural company, Koninklijke Maatschap de Wilhelminapolder (KMWP), has been using Wevano's new MKV box filler and (de) stacking unit since September. As it was the harvesting season, this machine got the chance to prove itself immediately. "And it succeeded," KMWP's Vincent van Coolbergen begins. "We had a similar system from another provider, but it kept breaking down. Then the whole storage line would stop, affecting capacity. So far, this new box filler is performing well."

Calm workplace
According to Vincent, the MKV is especially handy when things become hectic. "Usually, there's a forklift driver constantly driving back and forth, moving crates. There are empty crates to be filled and then those are stacked. Now the boxes are automatically placed under the filler, and the full ones are stacked, again automatically. That makes for a calmer workspace. There's much less to and fro driving back, so you're less in each other's way. And we're more flexible with our people now because the machine takes a lot of work off our hands. The staking is faster too."

"Besides increasing capacity - the machines can do 100 tons/hour, more than enough for the company's two four-row potato harvesters - the peace and quiet on the work floor and the product friendliness are just as important to us. We grow quite a lot of retail consumption potatoes, so maintaining quality is paramount. I think the machine's movements and minimum drop height make this box filler the product- friendliest, by far. Yes, it's an investment, but a truly worthwhile one," admits Vincent.

Filling and (de)stacking
Wevano has seen an increased demand from producers for stacking and de-stacking, so they can have more peace of mind regarding storage. "That's why we developed this new MKV box filler. It's a similar system to the box-bigbag filler when it comes to potato- friendliness, but we added a (de)stacking unit on either side of the buffer bunker," says John van Dijk of Wevano. 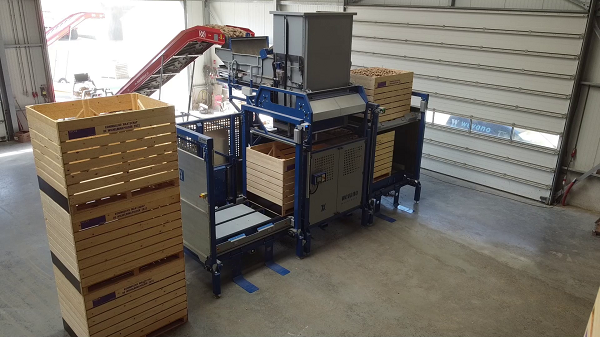 This version's new features include the box filler's wide filler belt, which also serves as a buffer during box changes. The filler belt constantly shuttles back and forth to prevent a dumping cone from forming in the box. The feeder then continues feeding products at a normal speed. John explains that the buffer bunker's operation is unique. "It's pulled all the way up and serves as a fall breaker. Its bottom reaches just below the feed conveyor belt, so there's little drop height, so the product doesn't get damaged."

Capacity, product-friendliness
This is how the crates are filled: a sensor determines the buffer bunker's height. That is done gradually until the set weight is reached. During filling, the buffer bunker lowers into an empty box that is placed at the ready under the buffer bunker. "The (de)stacker, which can hold four or five boxes, automatically supplies that empty crate," explains John. "So, fewer forklift movements are required, allowing a single employee to manage about 100 tons per hour."

Once the correct weight is reached, the buffer bunker drops to the lowest part of the box. Again, there is a minimal drop height. Next, the bottom opens, so the crate is filled from the center. The buffer bunker is then pulled up, and the bottoms close again. The filled box is automatically transported to the stacker, where a shaker is mounted, thus filling the crates nicely even. "The reactions to the new box filler are positive. Not only because of that peace of mind and ability to store the potatoes faster. People also appreciate its product friendliness," John concludes.