Lemon
According to AILIMPO's harvest estimate for the 2022/2023 campaign, Spain will produce 1,090,000 tons of lemon, i.e. 10% less than in the 2021/2022 campaign, in which -according to the provisional balance that accounts for the exported, processed, marketed fruit in the domestic market, as well as weight losses- production stood at 1,211,000 tons. The balance has been higher than initially expected in part due to a higher production of Verna lemon due to the strong increase in sizes, and the significant volume of round lemons harvested in summer.

The expected decline is due to adverse weather conditions in 2022, as the significant rainfall in March and April affected flowering and setting in many production areas. In addition, the summer has been particularly hot, with an increase in temperatures and no rain, which results in a delay in the development of the fruit and smaller calibers at the moment. The decrease will be noticed especially in the Verna variety, which will have a 22% drop. The Fino variety is expected to experience a 5% decrease. In any case, the collection rate and the development of the calibers will determine the final calculation of the harvest.

Spain will continue to be the world's leading exporter of fresh lemon and its second-biggest processor of lemon juice, essential oil, and dehydrated peel in the 2022/2023 campaign.

Grapefruit
AILIMPO estimates Spain will produce 76,000 tons of grapefruits in the 2022/2023 campaign, i.e. 10% less than in the previous campaign.

The impact of the special weather conditions on the 2022/23 lemon and grapefruit harvest
The graph compares, month by month, the rainfall data of 2022 with the average of the previous 20 years (2001-2021 period). 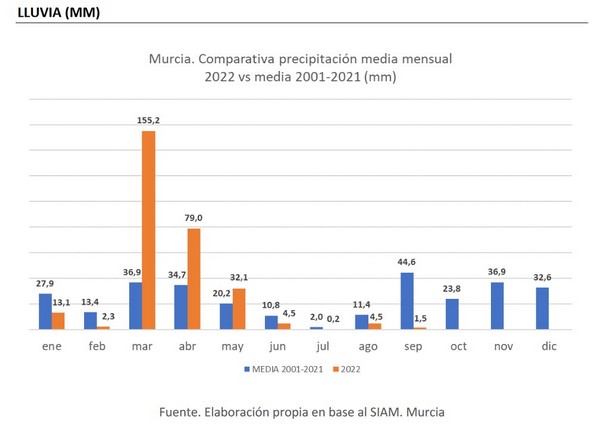 In 2022, the rainfall in the months of March, April, and May was much higher than the average. Thus, it affected the crops' flowering.

The following graph shows the number of rainy days during a decisive period in the flowering and setting of the fruit (from February 25 to May 5). 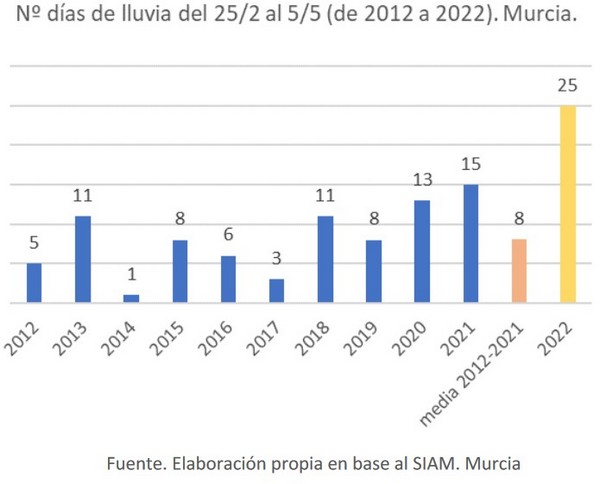 The temperatures of the months of May, June, July, and August 2022 have been much higher than the average of the previous 20 years. This caused problems for the setting of small fruits and their subsequent fall, as well as a slowdown in the growth of the fruit, which led to a reduction in sizes at the beginning of the campaign. 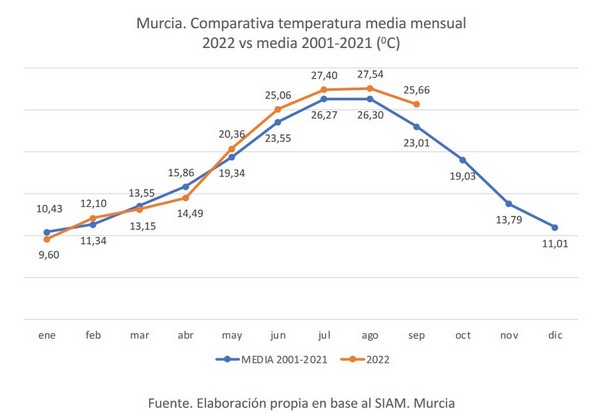