Citrus exporter: Appeal to shipping lines met with “an arrogance that astonishes me”

The Eastern Cape is ending its citrus export season on a frustrating note as they’ve had to pack two weeks' volumes on the MSC Carole (next week the MSC Domitille will omit Port Elizabeth).

Planning EU orange shipments are complicated this season: because of new cold requirements, some exporters last week stopped packing Valencias; fruit packed this week cannot be cooled in time to load on the MSC Carole (fortunately loading for the UK can continue until Thursday).

In turn, the MSC Carole will omit Cape Town on its northbound voyage, disrupting the planning of Western Cape exporters to service their UK and EU programmes (at this stage, they expect to be able to load from Cape Town on the MSC Polaris still on its way). However, when a vessel omits a port, those volumes miss their planned slot in a programme and represent a missed market opportunity.

The additional Europe string that Maersk introduced in June to Port Elizabeth to cover the Eastern Cape during the citrus season was a temporary measure and the last vessel departed last week, leaving a lot of fruit still to go to the European Union from the Eastern Cape. 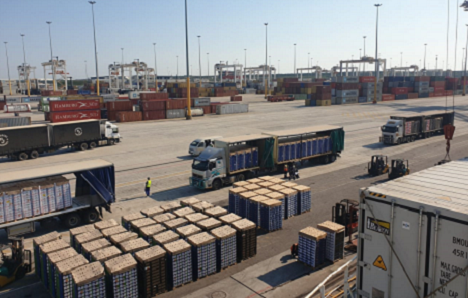 Profitability of exports chipped away
Port operations from Cape Town have also been patchy this season, as there are not always enough equipment or slots available. Exporters say at times they have containers but then there's no space on the vessel, or shipping lines send a smaller vessel with no notice.

“It has been a tremendously challenging season,” says a Western Cape citrus exporter who does not want to be named. “The largest contributing factor has been associated costs, of which shipping costs are totally out of control. There is nothing a producer, packer or exporter can do to negotiate more favourable rates or to attempt to adapt the cost structure downwards.”

He adds that all representations made to shipping companies have fallen on deaf ears “with an arrogance that astonishes me”.

“Shipping lines just do as they please, with no concern with the fact that because of shipping costs, products cannot be exported profitably anymore.”

Shipping costs double annual production
In his latest newsletter, the CEO of the Citrus Growers’ Association, Justin Chadwick, notes that with shipping lines hiking their prices by 128% between the first quarter of 2020 and that of 2022, “growers are having to pay virtually twice as much to ship their fruit, than what it cost to produce it over the course of an entire year."

“In order to guard against further price hikes and ensure price stability in the future, the CGA has been engaging with other fruit sectors on potentially taking control of their shipping, with a feasibility study expected to be completed by the end of September.”

Chadwick observes that while citrus exports are still steadily growing, the majority of local growers are faced with the very real prospect of significant earnings losses this year.

"Experienced industry commentators are of the view that fewer than 20% of citrus growers are likely to achieve above break-even returns at the end of the 2022 season."