Freshfel Europe, the European Fresh Produce Association, has released graphs showing the origin of oranges available in the European Union throughout the year, the CEO of the South African Citrus Growers’ Association Justin Chadwick writes in his latest newsletter, and what indubitably emerges is that from January to May, as well as in November and December, there clearly are no South African oranges on the market. 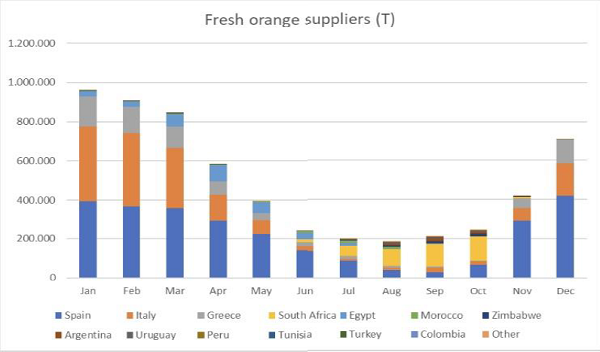 “Spain, Italy, Greece and Egypt are the main competitors, with small volumes from Morocco, Tunisia and Turkey,” he observes of the period of November to May. “During the European off season, South Africa starts up in July, supplying through to October together with small Spanish volumes as well as Southern Hemisphere supplies from Argentina, Uruguay, Peru and Zimbabwe.”

South African navel orange exports to Europe have decreased by approximately 8% compared to last year YTD, while Valencia exports have dropped by close to 20% when compared to YTD 2021 due to the huge uncertainty created by the new cold protocol.

The volume of South African orange exports currently underway to all European ports before the annual duty cutoff in mid-October (designed to protect the European domestic orange market) are, in fact, far below market potential, remarks a European importer of South African citrus who maintains that the new cold protocol simply cannot be accommodated within the existing cold chain infrastructure in South Africa. 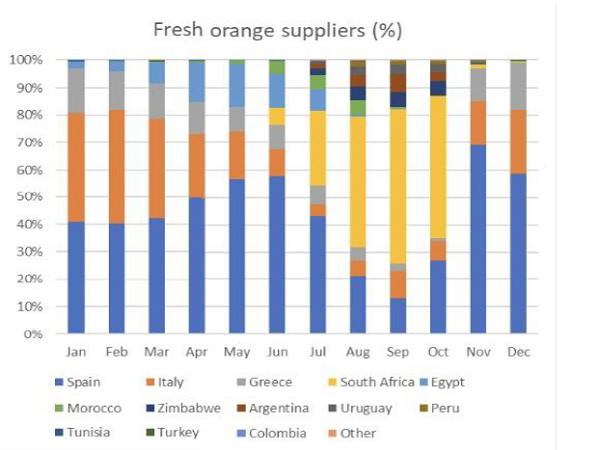 “If a loyal orange consumer opts for an alternative due to no product being available, and if they have a good eating experience with this alternative fruit, they may not move back to oranges when available again," Chadwick explains in his newsletter. "As such the number one and number two suppliers of oranges to the EU (Spain and South Africa) should be the closest of friends – these two countries can ensure that consumers are able to choose excellent quality, safe, nutritious and healthy oranges all year round.”

He notes that European orange growers are given the impression that South African counterseasonal oranges negatively impact on the domestic orange season while, as the graphs show, these oranges are not overlapping.

Phytosanitary compliance a top priority for South Africa
The biosecurity of South African oranges has been hotly discussed recently. The South African citrus industry’s strong research base built up over many decades include some of the world’s top citrus researchers, he notes, and enjoys worldwide recognition.

“Their research ensures that South Africa can export oranges while maintaining the allowable level of protection for domestic European orchards. There is an immense amount of literature on the success of South African global exports and phytosanitary compliance.”

He adds that the South African citrus industry would love to engage directly with European citrus growers to dispel "the scaremongering of certain elements in Europe".