In times of rising power and energy costs, effective, energy-efficient storage systems are in high demand. The young German company Muss Agrartechnik has been responding to this since it was founded in 2018. It specializes in innovative technology for potato and onion storage.

It also supplies a comprehensive range of technology around potatoes and onions, including sorting, ventilation, and harvest warehouse technology from recognized suppliers. So says co-owner Frits Schlimback prior to the company's first time as an exhibitor at Potato Europe.

One of the innovations the company will present at the trade show in Germany is the Synofog. This quite new heated spray system can be used with modern germination inhibitors. Muss Agrartechnik exclusively imports and supplies this system in Germany. "We've been supplying this system for about three years now," begins Frits.

"And we see more and more potato growers are switching over. Unlike conventional technology that uses internal combustion engines, this system uses heating coils. That's not only more user-friendly but also safer than the older method, which had its risks. Plus, the system distributes the agent better throughout the warehouse, resulting in a significantly higher final yield." 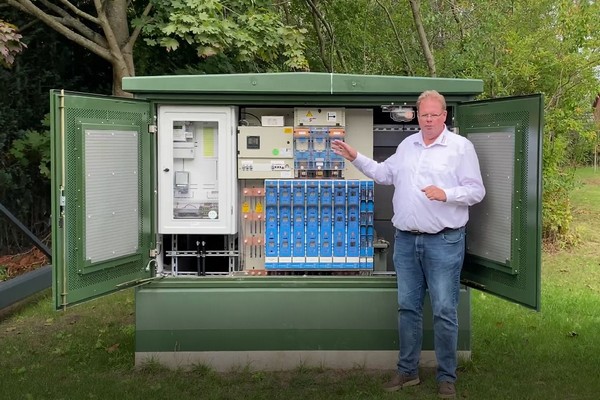 Modern energy management system
Frits knows that energy efficiency during storage is not only a wish for almost all growers; it is a must. "In 2019, we launched a storage PC under our MUSS label. It has an optional Energy Management module, which accurately maps the incoming and outgoing flow. That prevents excesses in the energy peaks, which, on balance, can add quite a lot to your power costs."

"The system has an intelligent priority control system that efficiently manages the various connected storage groups. The next step is to make this energy management system compatible with the modern smartphone so you can access the data needed at any time and act on it immediately," explains Frits.

Muss Agrartechnik is one of the few full-service companies in the market segment, so it supervises, coordinates, and constructs new builds throughout most of Germany. "Naturally, as Germany's largest cultivation area, Lower Saxony is our main sales market. But we're now also doing quite well in East Germany, Bavaria, and North Rhine-Westphalia."

"Our great advantage is that we can supply the storage warehouse's entire interior. So, not only the storage and ventilation climate technology but also the storage and sorting technology. Customers love that they only have to deal with one party: Alles aus einer Hand, as the Germans say," Schlimback says.

Delivery times, material prices are holding things back
According to this supplier, the pandemic did not hurt the investment drive within the potato sector. On the contrary: "Relatively speaking, there was more investment in 2020 and 2021. Subsidies were still available, and cost prices were still considerably lower. Now, people are becoming more cautious. The current potato and onion prices may seem good, but production costs are extremely high."

"It remains to be seen whether this will change the willingness to invest. Also, several subsidy coffers have been closed," continues Frits. "We'll certainly notice that next year. For us, as a supplier, the long delivery times and high material prices hold things back too. Fortunately, we haven't had to stop or turn down any projects so far. Still, it's sometimes challenging to keep stocks up."

Nonetheless, Muss Agrartechnik is steadily expanding its portfolio with, among other things, optical sorting technology. "We're working with Wevano and their U-Vision, deliberately focusing on optical "Size" and unwashed seed and ware potato sorting - there's still plenty of growth potential in particularly this market segment. We want to deliver the first of these sorting lines in mid-2023," concludes Frits.

You can visit the company at Potato Europe: Stand D20.