Coconut chips, for example, come from Sri Lanka, Vietnam, the Philippines and Indonesia. Synergies with organic growers in Sri Lanka make it possible to market these coconut products. One of BioTropic's agricultural engineers met the current partner for products from Sri Lanka while searching for drying ovens for the Ivory Coast. The smallholder structures there are very similar to those of BioTropic's own projects. Local processing keeps the added value in the country, which benefits both the farmers and the environment - one of the important principles of BioTropic's global work.

Cashew kernels are sourced by BioTropic from Tanzania. The cultivation of cashew kernels in Tanzania is taken care of by 250 independent farmers with over 80,000 cashew trees, which are cultivated organically. The cultivation area is located in the coastal strip of land south of the coastal city of Dar es Salaam, which serves as an export port. The harvest is collected in the villages themselves at established collection points, and from there it is transported to the factory near the city, where the kernels are cracked and their shells removed in a very laborious process. 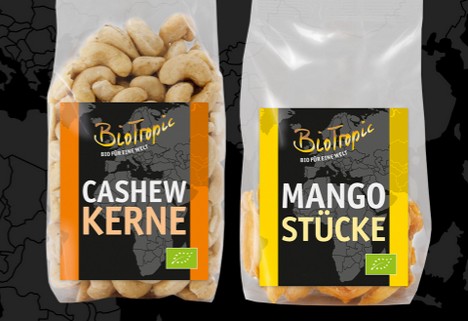 Mango pieces from the Ivory Coast
BioTropic is very successful in providing development aid in the Ivory Coast by managing its own cultivation areas in close cooperation with local farmers. These projects are "lighthouse projects" focussing on ecological cultivation and socially acceptable working conditions in the cultivation regions.

Raisins or grapes come from Turkey, from three project groups in different cultivation areas with a total of about 350 participating farmers. "We work with five processing companies that finish, package and export the raisins. The growing area starts east of Izmir and stretches along the coast. On the mountain slopes there are many small villages with populations between 200 and 500 people, whose main source of income is the cultivation of the Sultana vine."

The dried fruit assortment is rounded off by dates from Tunisia. The organic dates come from the Ben Chabbat Jedid oasis on the western shore of the great salt lake and the Amal oasis. The two plantations together cover 77.5 hectares with a tree population of 8,200 palms. Diversified use, the use of plant compost instead of mineral fertilizers and the cultivation of soil-improving plant species counteract the salinization of the soil, which is the greatest danger in desert areas with monocultures.