“We want to stay true to ourselves and keep the promise we made in the previous year to our partners, colleagues and friends, to provide reliable market information and updates on the Southern Hemisphere fruit trade outlook for 2022”, said Charif Christian Carvajal, SHAFFE President and representative of ASOEX.

After welcoming the 500 participants to the congress, he went on to say that this will probably be the most challenging season we have faced in the last 20 years, due to conflicts which are distorting markets and increasing costs.

The speakers echoed this by repeatedly saying that high shipping costs and unreliable service was the biggest challenge, this coupled with input costs increasing by on average 30% and in many cases labour is also a challenge. 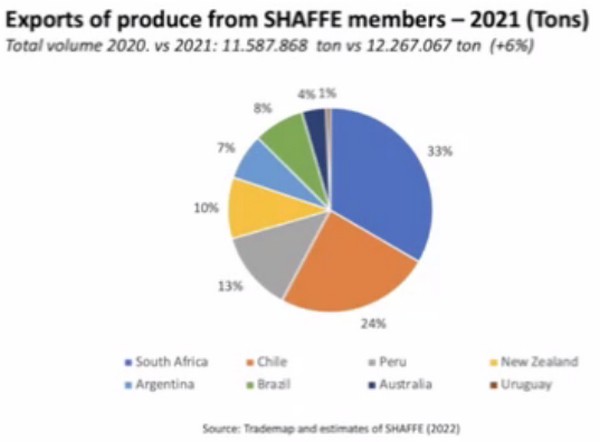 Exports from SHAFFE members increased 6% in 2021 compared to the previous year to reach 12,267,067 tonnes. The biggest exporter is South Africa with 33%, followed by Chile with 24%, in third place is Peru with 13%. When it comes to the value of exports Chile tops the list at 29%, followed by Peru at 19% and in third place comes South Africa with 22%.

Grapes, kiwifruit, cherries, apples and blueberries are the biggest fruit exports from SHAFFE members and account for 59% of exports. Cherries have seen the most significant increase in export volumes in the last few years.

Member’s survey
In a recent survey of the members were asked what they thought were the major growth areas for fresh fruit consumption: Ecommerce came out top, followed by health trends, sustainability has grown in importance from 26% to 35%. Food service has also been gaining traction.

Unsurprisingly logistical delays are seen as the biggest challenge to market access at 95%, phytosanitary challenges gained significance with an increase from 30% in 2020 to 50% in 2021. Domestic protectionism was also seen as a challenge.

Sumit Saran from SS Associates, India said that there were big changes in the Indian market, it takes a lot of fruit from a lot of countries. India is set to become the 3rd largest consumer market, these consumers are optimistic and tech savvy. Although India is the 2nd largest producer of fruit and vegetables in the world that production is mostly stagnant and not keeping pace with demand, it also mostly limited to bananas, mangoes and citrus, temperate fruit such as apples only account for 3% of the market. 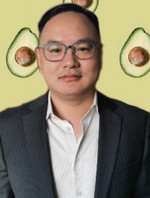 Kurt Huang Deputy Secretary  General CFNA said that despite the high freight costs and port congestion, Chinese imports were still up in 2021, this was due to imports of tropical fruit. The pandemic brought new ideas and fast developments. There has been little change to the retail market, but good importers are the ones who are developing, seeing that quality is more important than quantity.

Jeff Scott CEO of Australian Table Grape Association said that this was a challenging season for Australian grapes, although the heavy rains have not fallen in the main grape producing regions, the cool weather has delayed the harvest by 3-4 weeks. Quality will still be good, but the main challenge for Australian growers is labour with most growers saying they are at 50% of the workforce needed.

Jason Bosch, General Manager, Origin Direct Asia, South Africa said that the South African lemon season has started and the crop is looking good, there will be an increase in orange volumes of around 5% due mainly to new plantings. He said they face a challenging season ahead, but so did the rest of the world and they will do the best they can with the increase in input costs.

Ben McLeod Global Sales and Marketing Manager at Mr Apple said that Chinese domestic apple production was down 30% and that has driven demand for premium imported apples. China is a rapidly changing market and there has been a huge growth in online sales, the question is how can we optimise this? There are never 2 years the same in the Chinese market and he is very excited about the future. There has been a huge increase in the cost of shipping to India which has slowed demand for apples, there is also a lot Northern Hemisphere fruit on the market, he will not be looking at shipping there until later in the year.

Jeff Scott – There have been geo-political issues between China and Australia for a few years, it has been made more difficult by travel restrictions due the pandemic where buyers can no longer come and inspect the grapes in the orchards. This will settle down in the coming years, but at the moment export volumes are down 20-30% due to this disruption in relationships. The Indian market has not been strong for Australian grapes, but it is now improving.

Mario Edwards, Commercial Manager of Agrofruta-Chile – Export to China was going well until just before Chinese New Year when the late shipments were too late for the Chinese New Year. He said that if the shipping issues were not solved the same would happen this year, he said we need to work together for better results, for good of everyone. He sees good prospects in India for Chilean fruit, but the distance is a problem as is the high cost of freight.

Daniel Bustamante - Chief Commercial Officer of Grupo Cerro Prieto agreed that logistics was the biggest issue for Southern Hemisphere exporters and that Peru was a long way away from China and it requires a special kind of fruit to make it there with good quality. That said, he thinks exports to China will increase 20-25% in the main part of the season which is July, August and September. Peru gained access to India for blueberries in September 2021 and shipped 30 tonnes, all via airfreight due to the transit times. He said it was a good experience.

Jason Bosch – said he was cautiously optimistic about this season’s export to China but another round of lockdowns could complicate things. He also spoke about South Africa’s shortage of containers, they expect to export 100,000 containers of fruit and they can’t just magic up empty containers, there are also less ship calling at South African ports. There has not been much traction for South African fruit in India but this may change in the future as export were increasing.

Luiz Roberto Barcelo, Owner Agrícola Famosa & Director Abrafrutas said that with a 50% increase on sea freight costs last year and the possible further increases this year would make produce very expensive. The Russian war has also had a big impact on the cost of diesel and fertilizer and would impact the production costs.

Carlos María Fraschini, Director of AZUCITRUS said Uruguayan exporters are focussed on export markets as domestic sales are low. The high freight rates would require analysis of the impact they will have on trade. Russia is a big market for citrus exports, especially mandarins. The closure of this market will impact other markets.

Augustin Argibay, President of CAFI – The Argentina Chamber of Integrate Fresh Fruit Producers said that it would be difficult to find new markets for fruit destined for Russia due to the different specifications and quality.

Eugenio Olivera, CEO of Consorcio Productores de Frutas (CPF), Peru – Russia imported 70,000 tons of mandarins last year, and asked where would this fruit go to this year? He said it would be good to know what other countries were doing. He said also that shipping lines need to understand that they can’t charge citrus shippers the same they do for other commodities if they want this business back next season.

Ron Lemaire, CPMA President-Canada said that many of the supply chain issues were there before the pandemic but have now been emphasised by it. Fresh produce is a just in time product and it is extremely challenging.

Terry Meikle, CEO of New Zealand Apple and Pears Inc the biggest challenges to the New Zealand apple and pear industry were labour, shipping and logistics as well as geo-political issues.

Ronald Bown, ASOEX President-Chile said the Russian invasion of Ukraine was a great source of concern, probably the greatest problem in his 35 years in the industry. The increase in costs, raw materials, shipping and lack of labour. As a country we rely on our foreign trade and sometime there are just no ships.

Anton Kruger CEO – FPEF South Africa said that 4 million tonnes of South African fruit goes to Russia and fruit intended for Russia can’t be easily directed to other markets which leave them with a predicament.

Ron Lemaire said that the global coalition can look at how to work together with stakeholders in the industry and work with shippers to solve the issues.

Charif Christian Carvajal said that as a leading trade association the coalition should voice their concerns to stakeholders.