The melon supply is currently shifting from Brazil to Senegal. The Central American melon season has started much too late. Normally, the first volumes arrive in early to mid-February, but this year no significant volumes have arrived on the European market until this week. The first Sicilian melons are also expected this month. So far, the growing season is looking very good. In China, production is underway in the Hainan province. Volumes are lower than normal, but prices are strong for the time of year. 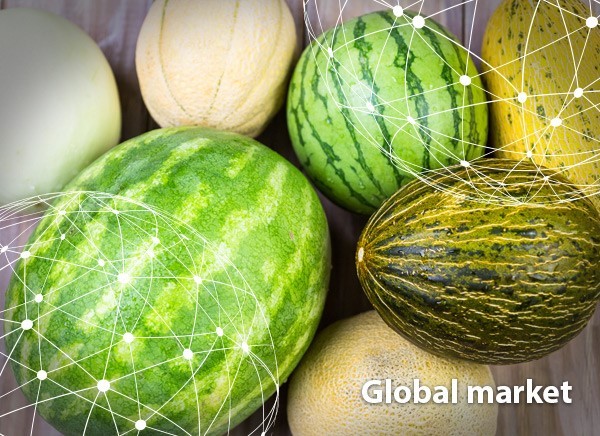 Netherlands: Good watermelon prices, but short window for Central America
Despite the fact that the watermelon sector is missing a good part of its sales to the catering industry, the price is at a high level. “For weeks now, they have been sold for between 1.30 and 1.40 Euro; and that is in winter time,” said a Dutch importer. Unlike in the case of watermelons, the market situation for Galia, yellow and Cantaloupe melons is normal, he says. "And it is exciting to see how that market is going to develop. The Central American melon season has started much too late. Normally we receive the first volumes after the fair in Berlin, but this year no significant volumes will arrive until this week, so we've missed a month. At the beginning of April, the first watermelons from Morocco will also arrive, soon followed by Spain. It will therefore be quite a challenge to get the melons from Central America sold in four weeks, although necessary, especially now that the catering industry is not yet open!"

“Senegalese watermelons are slightly more expensive than Brazil's, but their high sugar content makes them very popular. The demand for the first Senegalese watermelons is therefore very high, which is quite surprising, considering the current cold weather in many parts of Germany,” reports an importer. The first black, seedless watermelons from Senegal are also expected this weekend.

Italy: First Sicilian melons on the market this month
When it comes to melon consumption, Italy is divided in two. In the north of the country, consumers prefer melons with a smooth skin, while in the south, the preference is for a melon with a rough skin.

According to a trader, the import of melons lasts until the beginning of May, when the Sicilian melons hit the market. Then it is the turn of the Italian production grown in the rest of the peninsula. The Sicilian melon will be back on the market in November.

More and more seedless watermelon varieties are becoming available in Italian supermarkets. There have also been changes in format preferences, with mini sizes currently accounting for 50% of the market. The Sicilian mini watermelon is cultivated both in tunnels and in the open ground and the season lasts from May to September, similarly to normal watermelons, which, however, are only grown in the open ground.

From mid-February, it rains a lot in Brazil, so the quality decreases at this time of the year and other origins take over on the Spanish market, mainly Senegal. The Brazilian melon season was quite satisfactory for Piel de Sapo melons, with stable and acceptable prices thanks to the lower volumes (-10%). The Brazilian trade in Piel de Sapo melons is becoming more and more specialized, increasingly coming into the hands of highly professional companies and prestigious brands. Not everyone can grow in Brazil; the investments and risks are high. Brazilian yellow melons have done quite well this year, but the Galia have had a hard time due to unstable prices. Competition from other Central American origins was limited due to the heavy rainfall.

The first watermelons from Senegal have arrived in Spain and the first Piel de Sapo melons are expected in a week. Climate conditions have been ideal for melon cultivation in this African country, so the quality is expected to be excellent. However, volumes will be lower, as one of the largest Spanish companies involved in the fruit's cultivation decided to cut back on investments due to the uncertainty generated by the pandemic. Last year, tons of melons were left unsold. In any case, Senegal is a good strategic option for those wishing to grow and supply Piel de Sapo melons all year round.

The Senegalese melons will be followed in May by the Spanish melons, starting in Almeria. Growers in Almeria are busy planting the melons and watermelons. Seed companies said that the demand has been more contained this year. The sector is becoming more professional and growers are increasingly planting based on predetermined supply schedules, fueled by fears sparked by the pandemic.

The cantaloupe melons come mainly from Honduras, Guatemala and Costa Rica. “Earlier in the winter, the supply had come under pressure due to the two hurricanes in November,” says the trader. "Since Mexico doesn't really play a big role in the melon market, there was no other region to compensate." Overall, the market conditions have been quite solid. Prices have stood at high levels and importers have worked hard to ensure that retailers had sufficient stocks.

The watermelons now available come from the Mexican regions of Nayarit, Jalisco, Colima and Michoacán and compete with other growing regions, including Honduras and Guatemala. Mini watermelons have had good sales and a consistent price level. Domestic production in Florida kicks off in April.

Guatemala: Good volumes and high prices expected
Spring cultivation is now starting in Guatemala for the honeydew and cantaloupe melons. There are usually two production cycles, with the spring cycle being the second. The first production cycle of this season was badly disrupted by hurricanes Eta and Iota in November, which left hardly any volumes available. Fortunately, the newly started second cycle seems to be running smoothly and volumes are expected to be good, with high prices due to shortages earlier in the season.

Honduras: Melon prices have been breaking records since December
Honduras suffered the same problems as Guatemala, as the country was also hit by hurricanes. Their first cycle was also badly affected, but there appears to have been a full recovery for the second cycle, which will start in mid-March. The melons from both Guatemala and Honduras have been reaching record high prices since December, but these are expected to level off to normal levels as soon as Honduras enters the market in mid-March.

China: Melon prices have doubled compared to last year
The melon season is underway in Hainan; however, the low temperatures have resulted in low sugar contents, so the sweetness and taste of the melons is generally not as good as in previous years. The current market price remains at a high level and has almost doubled compared to last year. On the one hand, due to the extreme weather in the country, production has dropped sharply, and on the other, the corona crisis has been a hurdle for the exports from Southeast Asia to China, leading to a further decline in the volume of melons on the market. The shortage of melons has led to price increases.

The Hainan season usually has two harvests in one campaign. Production in the early part of the season was extremely low and the supply / demand ratio was unbalanced. As a result, some growers considered planting again to extend the season. The Hainan melon peak season lasts from July to August.

The melons in Anhui, Henan and Shandong are mainly grown in plastic greenhouses, with small planting areas and short production periods. The sales season peaks from March to May. This fruit fills the gap between the Hainan and the Xinjiang season. The high prices are expected to continue until April. In June, large volumes of Xinjiang melons hit the market and the price then is expected to fall sharply.

Australia: Melon sector investing in traceability
The Australian melon industry has recently invested in strengthening the traceability of its fruit, with a Victorian cantaloupe melon grower successfully completing the initial stages of a pilot program. Dawson Melon Co, in partnership with FreshChain Systems, NSW DPI and in-store support of specialty food stores, has tracked whole and sliced ​​cantaloupe melons from field to the consumer. The program aims to improve the trust of customers and consumers in both the safety and the quality of its cantaloupe melons, especially after the health issue reported in 2018.

According to Hort Innovation's latest statistics, 190,024 tons of melons worth $ 152.1 million were produced in the year ending June 2020. The value was five percent higher than in the previous year, despite a 13 percent drop in the volume. Out of the total, 58,136 tons corresponded to melons (cantaloupe and honeydew melons worth $ 68.4 million) and 131,889 tons to watermelons (worth $ 83.7 million). There was a one percent increase in the total export volume, which amounted to 21,772 tons, while the value increased by six percent, to $ 39.3 million.