"Importing bananas yourself is a risk that doesn't pay off"

Bananen + Frucht AG is a modern service provider with its own ripening facility at Zurich's Engrosmarkt. "We sell around 3,500 tons of bananas per year," says Thomas Hug, the company's managing director, in an interview with Tierwelt. Founded in 1939, the company now offers various banana labels in several degrees of ripeness. The company sells the ripened tropical fruit to Volg and Manor supermarkets, local markets and to the food service industry.

Bananen + Frucht AG gets its goods via the port of Antwerp, from large corporations like Chiquita, Dole and Fyffes. "My dream is to become independent of the multinationals, but that is almost impossible," says Thomas Hug. He has also marketed bananas from Ethiopia directly. But the fruit had brown spots on the peel, which customers do not appreciate. 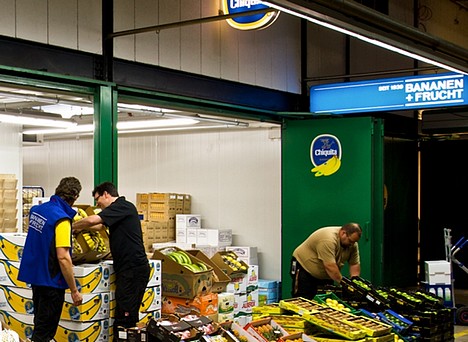 The stand at the Zurich Engrosmarkt / Photo: Bananen + Frucht AG

Perishable goods
"Importing bananas yourself is a risk that doesn't pay off. If the goods are spoiled during transport, I'm faced with a big financial loss," says Hug. That's why the big companies work with big volumes. "This way, they can compensate for losses if bananas are spoiled after being transported by ship."