More visibility in the logistics sector

UK-based digital supply chain management system Chill-Chain says it has been able to save both fresh produce companies and transport operators money, since it was launched in December 2018.

Chill-Chain is a web application, which users can access from a workplace computer, or their web browser on a mobile device. It is free for growers, fresh produce companies, and transporters to put a load on the system and receive a quote back. Founder Jack Fleming says Chill-Chain only charges a transactional fee once a company does business through a low percentage point on an invoice. 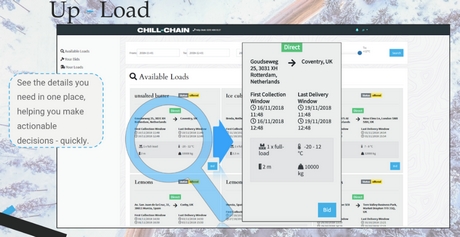 "We are quite passionate about this and I think this is the right model," he said. "Historically when there have been systems put in place, they charge subscriptions and entry fees. I think this is unfair, especially for the smaller companies, because they don't know how much business they will generate from it. To offset the small commission we take, we pay early and when it is all netted out companies are significantly better off when they take a Chill-Chain order than one from their traditional models."

Mr Fleming says the initial idea for the platform came after he was shocked that people all along the supply chain could not track their goods 100 per cent of the time, adding that his concept came from the fast food industry.

"I was astonished by the problems that my father has faced over the years with logistics," Mr Fleming said. "Particularly the phone calls on a Saturday morning from the customer asking where is the load was, because they were expecting it earlier in the morning. The first thing he heard of it was when the customer called him. I recognised that problem, as one of visibility; I thought it was slightly preposterous that I could know where my takeaway pizza is from the moment it left the oven, but a lorry of blueberries worth half a million Euros, no-one knows where the goods are at any given time. It shocked me that it was a problem that technology could solve."

Mr Fleming worked for a number of technology and logistics companies, such as Deliveroo and taxi company Gett. He says in addition to the issue of visibility for the fresh produce industry, there are also problems around the time it takes to arrange transport and logistics.

"Usually companies have three selected providers - but even that takes time to contact them and get quotes," he said. "I recognised that there is definitely opportunity to go to a wider market and get more quotes, which invariably means better prices in the end, and options for better service levels. Also, we can take that business to transport companies that would not otherwise see the business from large companies, or have the opportunity to market themselves in certain ways. We are using the technology to book and manage transport and the service levels associated with it for fresh produce companies."

Chill-Chain ensures security for all their clients, by undertaking checks on all the companies that it works with to verify their credentials, insurance documents and operations licences to make sure everyone meets the minimum standard. But Mr Fleming says his service can equalise the dynamic between large and small companies throughout the industry.

"What we are quite delighted with is that smaller transport companies that do have the right insurance levels wouldn't get the chance to quote for business from large fresh produce companies or large shippers," he said. "We make that possible. We are not here to stop or prevent those two parties developing a relationship outside of Chill-Chain. We actually think that's a positive thing. One of the things we are most proud of is the management screen, that shows you where the lorry is but there's also a chat window that allows the transport operator to send messages directly to the customer. It really speeds up communication and makes it more efficient. Chill-Chain can step in, but generally we try not to be involved in that conversation." 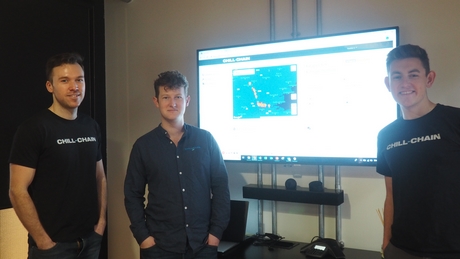 One of the main factors in the success so far, according to Mr Fleming, is the independent and impartial nature of the service.

"It is a relatively political industry, and we sort of stand apart from that," he said. "We offer access to a wider market base and the opportunity to reduce empty miles and empty lorries because we can spread ourselves wider and market ourselves in a way that hasn't previously been possible because of our digital nature. We are even speeding up payment terms; even the largest firms use invoice finance they are paid so slowly."

Chill-Chain is currently focussed on temperature-controlled transport, which it is hoped could eventually stretch beyond the fresh produce industry, and bring manufacturers to the table to increase the efficiency of the network and create volume and critical mass. Mr Fleming says in the United Kingdom, up to 35 per cent of lorries on the road at any given time are empty. They make up 5 per cent of road miles made by vehicles, yet they make up more than 25 per cent of emissions.

"So, this aggregation into a digital space, can really be a complete game changer in reducing emissions, and providing opportunities for companies to meet their targets, in a way that doesn't take any capital outlay" he said. "It is a more sensible way and efficient way to use the network."

Mr Fleming also sees potential in providing value to companies once Brexit takes effect, because of their ability to develop technology systems fairly quickly, once they discover what problems the industry will be faced with.

"With Brexit, if it is the case where the status quo no longer exists, there will be more friction at borders in once shape or another. What we strongly believe is that the visibility and technology that we can provide can reduce some of the issues that arise. It is never the case where everyone expects every lorry to turn up on time, but what is expected is clear transparent communication between service provider and customer."