New Russian bans and the lifting of old ones

Countless producers and consumers around the world have been affected by the Russian boycott and Russians themselves are no exception.

President Putin met with President Erdoğan in the middle of August to discuss the possible lifting of the Turkish boycott this year. “It is our priority to once again reach the pre-crisis levels in our bilateral relationship,” according to President Putin during the press conference. “That is an important assignment, because Russian-Turkish trade decreased by 43 per cent in only five months of this year.”

There were also reports that the quality of the fresh produce segment has decreased in Russia since the boycott on Turkey. A convoy of angry farmers is on its way to Moscow to draw attention to the corruption of local authorities. A band of smugglers have fixed a road and broadened it to expedite the transport of illegal products.

Fruit and vegetable producers in Bosnia & Herzegovina, Republic of Srpska were dealt a blow right at the start of harvest season when they were hit with a Russian ban. Officials were quick to respond, immediately planning high level meetings and inspections to discuss the situation. Unfortunately for growers, the issues were not resolved until the end of October, much later than they initially expected.

Difficult month for Zespri in China
The beginning of August was a difficult start of the month for Zespri in China after Chinese authorities found a fruit rot fungus (Neofabraea actinidiae) in some of the fruit entering the country. In order to keep the situation under control, Zespri confirmed on the 5th August that it had placed a temporary halt on all its shipments to China, while it works with the Ministry of Primary Industries to develop a thorough testing regime.

A little over a week later, there were rumours that the fungus claims might be about revenge, after claims that China could retaliate against New Zealand's dairy and horticulture exporters in response to a potential investigation into alleged Chinese steel dumping in New Zealand. However, New Zealand's Prime Minister John Key insisted that there wasn't a link between the kiwifruit industry's export problems in China and allegations that Beijing is carrying out a "trade war" with New Zealand.

It was announced that exports would resume on the 22nd of August, and despite the bump in the road with trade in China, Zespri announced record sales and the highest-ever total grower returns for Zespri in the 2015/16 season.

Apple forecast positive
August is always a big time for apples, and this year was no exception. In the US, Scott McDougall of McDougall & Sons, a co-owner of CMI, was named U.S. Apple Grower of the Year for 2016 by American Fruit Grower magazine.

Steve Lutz from CMI also gave some good insights into the US market in August, sharing that commodity apples still account for the bulk of U.S. apple sales, but organics and new varieties are responsible for a lot of new growth. Growers with premium programs see much potential in new apples and organics because those varieties are exploding in popularity and they command high prices.

“If you look at varieties like Honeycrisp, Ambrosia, Jazz, Envy, Kiku and Kanzi, and you total those up with organics, that’s the sales growth of the apple category in the United States,” said Steve Lutz with Columbia Marketing International. “Conventional and commodity apples are actually losing dollars in retail, so consumers are shifting to higher value apples.”

Despite some NY apple growers being hurt by pockets of hail and late-spring frost, following unusually mild winter temperatures, the state reported that it was still expecting a good harvest, just somewhat lighter than last year’s near record-setter. New York is the nation’s second-leading producer behind Washington State, which accounts for 60 percent of the U.S. market.

According to the annual forecast released on the 4th of August by the Washington State Tree Fruit Association, Washington apple growers expected to harvest about 133 million 40-pound boxes — 2.67 million tons — for the fresh market this year. The forecast was a significant improvement from last year's 115 million but still below 2014's record of 141.8 million boxes.

An early start to this year's harvest brought California's shippers more competition from old crop fruit that was still available from storage. California growers typically harvest apples around the middle of July through the end of August.

Apple picking also started in Ontario during August and growers were positive and expecting a good year. “Currently the crop looks good,” said Tom O’Neill of the Norfolk Growers' Association. “It’s been a little dry here so early fruit size is off a little but I’m quite surprised at how big they actually are.” He attributes good weather, good bloom and very good cell division for getting crops back on track this year. McIntosh will be picked the first week of September, then some Galas, then Honeycrisps until the season stops at the end of October. 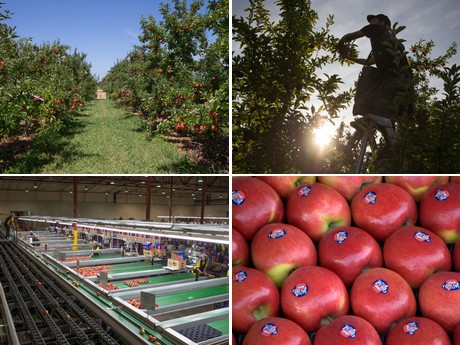 In Europe, it was announced that the consumer would have to do without Jazz apples for a while. For the first time ever, there was a 'gap' from mid September to mid October, due to the New Zealand season ending earlier and the European season not starting until October.