April 2016 brought the last CPMA show to be held in Calgary on 12-14 April, 2016. While this year's convention was the last time Calgary would host the event, the 2016 show also brought about a first. This was the first time that the show was held midweek, and the change was very much appreciated by those in attendance.

“Over 95 percent of the people who have spoken to me about this have said the shift to a Tuesday through Thursday event has been fabulous,” said Lemaire. “This is the way the business now runs, with people saying that they can still work during the week and they can go back during the weekend and get back to the office fresh for the following week.”

With the event condensed into fewer days, Lemaire added that more people were sticking around for the entire duration of the convention. That's boosted participation in social events that encourage building industry relationships.

Shortly after the last CPMA Calgary event, the 2nd FRESKON exhibition, held from the 21-23 April 2016, was able to boast a 40% increase in exhibitors.

According to the project manager of the fair, Tonia Nikolaidou, the show has managed to bring together all the decision makers of the sector, “including fruit and vegetable wholesalers, fruit importers, exporters and retailers. Also, significant has been the presence of supermarket chains from Greece and abroad, together with agriculturists and producers, as well as that of all professionals involved in the packaging and logistics sectors.”

Mostly good news for Zespri in April 2016
For the 2016 New Zealand kiwifruit season, Goodfarmer Group held a grand opening ceremony at the beginning of April for its Zespri Kiwi, Beijing flagship store in the Xinfadi Market. Goodfarmer Group has been cooperating with Zespri for the past four years and according to Tian Chunge (Zespri North China general manager), the Beijing flagship store opening was a sign of their commitment to future cooperation between Goodfarmer and Zespri.

2015 was a positive year for Zespri and a USGAIN report stated that export volumes were expected to resume a faster growth rate, expanding by an estimated additional 20% in 2016. The main driver behind the expected production increase was the new, and very successful, Gold kiwifruit variety “G3”, which now makes up 35% of the total kiwifruit area in New Zealand.

“The gold category is still underdeveloped globally and SunGold offers more potential to access new consumer tastes, with its different flavour, different colour and health benefits. Zespri has also been working on increasing the taste standards across our range, so we’re constantly taking measures and adapting to meet consumer demands and raise the standards.” shared Zespri Chief Operating Officer, Simon Limmer, back in April.

There was one small glitch for Zespri when they were forced to put some kiwifruit exports on hold while they investigated a packaging issue. Small deposits of mechanical lubricant were found on a very small number of kiwifruit pocket packs (which hold the fruit in place in the single-layer or IT trays).

Tomatoes and new packaging in the spotlight
Tomabel introduced their new line of tomatoes in April called Nova. Ann Beyne of Tomabel explained that they have been working on the design of the new line all winter. 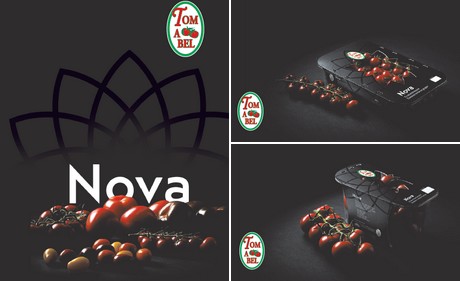 “Retail and export studies, which we've had done, show that customers are looking for something special in premium packaging. We felt up to this task and discovered beautiful strains. The new packaging is noticeably dark and really brings out the red of the tomatoes. Among the specialities, six types of tomatoes are packaged under this new line. These are the vine cherry tomatoes, the snack mix, the vine cocktail tomatoes, the cherry tomatoes, loose plum tomatoes and chocolate tomatoes. Loose tomatoes are offered in a special Nova box of 30x40 centimetres. The box contains about 2.5 to 3 kilos of tomatoes. The punnets with sleeves are also packaged into these boxes.” shared Beyne.

Mid-April saw the Tomato Conference in Antwerpen and Jan Schockaert, department manager for fruits and vegetables with Colruyt, shared that tomatoes are an important vegetable within the total fresh produce assortment.

Scandinavian countries ask for special tomatoes which are also an important product in a region where people eat approximately 10 kilos per year per person. Swedish company, Hebe Frukt & Grönt AB, have responded to this demand and announced in April that their small organic pick and mix tomatoes from Holland were back on Swedish shelves. Offered under the name 'Taste Wonders', the Dutch tomatoes are available earlier than the domestic supply to fill the big push for organic specialty and heirloom varieties in the Swedish market.

"We would like to continue in this direction of selling other organic produce loose in the supermarkets as well, but it will take a bit of time before that happens because it can be difficult with pricing and supermarkets can be slow to change. Tomatoes were a perfect fit for this concept because we are able to offer the tomatoes at the same price as Swedish tomatoes and since the loose tomatoes are all offered for the same price, it is easy for cashiers at the supermarket." shared Anita Jansson
Hebe.

Rounding out the month, the "Great British Tomato" took center stage during the annual TGA Conference in Warwick. With speakers discussing topics like Brexit, the state of UK tomato retail, energy trends, plus a variety of research projects being presented, it was a not-to-miss event for the UK tomato grower.

Chris Cowan, of Kantar’s Worldpanel Produce Team, gave some insight in what is going on and what to expect in UK fresh produce retail. Cowan provided many figures on the British consumer’s shopping behavior and paid special attention to the rise of discounter Aldi. His figures for British growers are looking good; overall, UK households are buying more produce this year compared to last year. The overall tomato sales grew by 2,4% and saw an increase in volume of 2.2 %. Plum Baby tomatoes are a standout performer in these figures.