In North Carolina a new storage and packing house is built. Farm Fresh Produce invested $5m in this facility, which is in line with expansion plans. Even though the construction was delayed due to hurricane Matthew that hit North Carolina recently, everything is going as planned according to the company’s president Steven Ceccarelli. 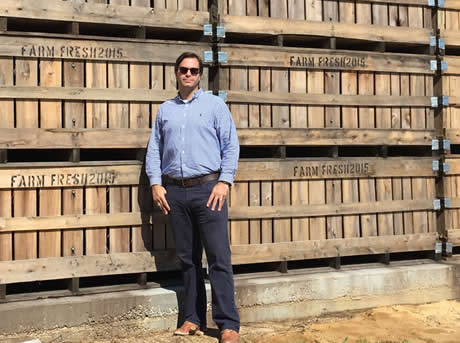 “There has been a two week delay due to the hurricane but everything is going in phases, storage building is fully constructed and now we are working on assembling our packing line. The most important part was being ready for the harvest, in the meantime we have to work with what we have,” says Steven.

The storage facility was supposed to be complete by September but this happened only 2 weeks ago. This, Steven says might slow them down a bit, but was quick to add that quality and standards will remain the same even with the delay. The new packing line, however, is expected to be ready by January next year.

Hurricane Matthew effects
“We were incredibly lucky after the storm, for about seven days after we had sun throughout, temperatures have been good since, we have been very fortunate as we are looking at a 10% to 15% loss,” said Steven.

According to Steven, most sweet potato growers had harvested most of their crop by the time the hurricane hit which means there will be plenty of sweet potatoes available for the holidays from North Carolina.