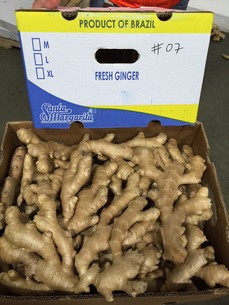 The Brazilian ginger season is almost finished. The country exports ginger to the U.S. and Europe. "We have two seasons: one in which we export by air, which runs from April to June, and another with shipments by by sea from July to December," explains Apanatche Bark Silva, of Brazilian Best Ginger, based in Florida, United States. "We are the largest exporter of Brazilian ginger. We have our own packaging plant and even the G.A.P. certificate from the U.S. We do not have the GlobalG.A.P. -nobody has it in Brazil-, but we're working to get it."
Brazilian ginger is of better quality
Brazil has to compete mainly with Chinese ginger, which has entered the market strongly this year. Brazil exports to the U.S. and Europe. Other markets, such as Russia, prefer the Chinese, which is cheaper. "The difference is of 5 to 10 dollars per box," points out Bark. However, "Brazilian ginger is of better quality, with larger calibres and a more lustrous appearance. It has more fibres, which many people do not like, but which increase the shelf life of ginger. Its flavour is slightly spicier and tastier." Even though it doesn't have the necessary certificate to be exported as organic, Brazilian Best Ginger barely uses any chemicals during the cultivation process, which makes it a very healthy product.
China has entered strongly
Bark has noticed a big change in the market this year compared to last season. "Last year, prices were very high. I think it was because of China's shortages. This year, China has had plenty of supply and has been exporting at very cheap prices, of up to 7 or 9 dollars per box," he explains, adding that this has forced them to lower their own prices. 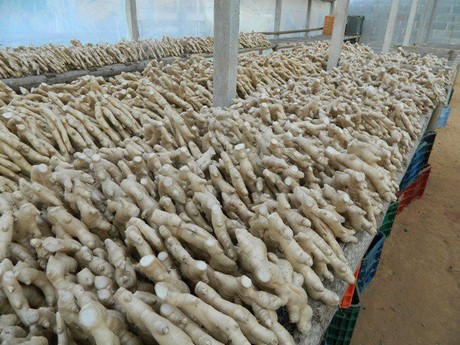 In terms of volume, Bark speaks of nearly 100,000 boxes exported to the U.S., and half of that to Europe. "The volume for Europe is lower than last year, but in the U.S. we have sold more than last season," he states.
Brazilian Best Ginger opened its headquarters in Florida two years ago as an extension of the Brazilian company, which has been producing ginger for over 12 years and with which it works closely to ensure the best product is exported from Brazil.
For more information:
Apanatche Bark Silva
Pommer Fresh Foods
Fort Lauderdale, Florida, United States
T: +1 (754) 701 5767
E: apanatche@brazilianbestginger.com
www.brazilianbestginger.com