Murcia's broccoli production is gradually increasing towards the start of the strong autumn-winter campaign, when the largest volumes will be exported, mainly to Europe.
In a year marked by severe drought, this season's open field vegetable production will see a reduction in the yield per hectare due to water shortages in the south of Murcia, particularly in the Valley of Guadalentin, where there are many broccoli growers. 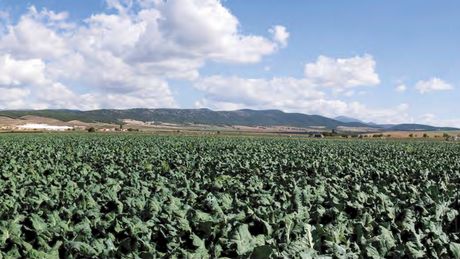 "The lack of water resources is increasingly affecting our crops, reducing the yield, which ends up taking a toll on our profit margins," says Francisco Mula, general director of Agrícola Santa Eulalia.
This Spanish company, based in Totana, focuses on the production and marketing of broccoli, which accounts for 90% of its product range, with over 1,500 hectares of geographically diversified crops to ensure a year-round production of around 23,000 tonnes, with supermarket chains being its main clients. 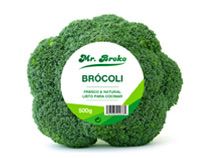 Most of the broccoli produced is exported, as Spain is not a major consumer. "Broccoli consumption in Spain concentrates mainly in the north, where the climate is cooler, but we export about 90% of our production. In winter, the UK, Germany, France and the Netherlands are our main destinations," he explains.
"In summer we usually ship mainly to Italy, Greece and the Middle East, and to a lesser extent to northern Europe, where we compete with local producers. However, some foreign chains continue to prefer importing Spanish broccoli because of its quality, such as in France, and recently, Saudi Arabia, which already consumes our broccoli all year round."
MrBroko®, a broccoli with a unique name
"The need to differentiate a product as standardised as broccoli led us to develop a unique brand that ensures added value, and that is how MrBroko® was born three years ago," says Francisco Mula, who so far has been very pleased with the results. 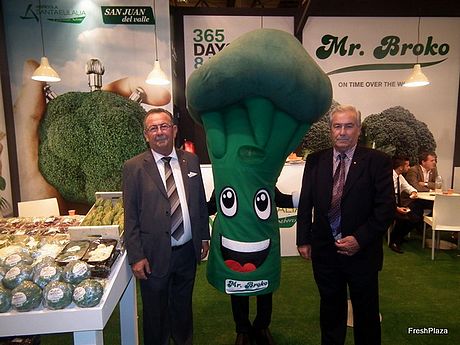 Francisco and Juan Mula Alcaraz, at the stand de Agrícola Santa Eulalia in Fruit Attraction, next to Mr. Broko, one of the most entertaining characters at the recent horticultural event

"Since the creation of MrBroko®, our share of domestic market penetration has been increasing and we have been able to access supermarkets where broccoli sales have grown substantially as a result of this. We have also managed to access markets which we were not able to enter without a brand, such as Italy, Greece, Cyprus and Lebanon."
For more information: