"Erik Leerdam (Longobardi): "Worldwide there is room for 150-200 machines"

Optical sorting machine runs over 30 tons of onions per hour

Longobardi (a company that manufactures high quality machinery for the fruit and vegetable sector) was present at both the Macfrut event in Cesena, Italy and the PMA in Los Angeles. This family company, from the Northern Italian apple country in Bolzano, has been developing equipment around apple sorting machines for nearly a century. Since acquiring the machine manufacturing company, Sammo, a few years ago, Longobardi has become a key component in the onion sector.

The Dutchman, Erik Leerdam, works as the company's business development manager. "I use my experiance to open markets and bring structure to the company. My job is to connect people and companies. To sell machines from A to Z is the work of salesmen and dealers in different countries."

Calibrating
"Sammo already had a sorting machine with a good working mechanical element, specifically designed for onions, with infrared cameras for the internal sorting process. The existing camera system for the external sorting process was insufficient, and has therefore been replaced by a new system that was developed in-house. This is why Longobardi and Sammo are very successful in the onion market right now. Although we do not offer anything cheap, we do offer a revolutionary technique concerning the sorting of onions at the internal and the external level," says Erik. "To date, we have not given much publicity to the sorting of the onions, under the motto 'not words, but actions'. 10 sorting machines are currently in use in Europe and the USA and we are definitely through the start-up phase. Moreover, I am always emphasizing that you are never done spending money on the machine. There is always a gray area in sorting. You have to program the machine and calibrate it to sort in the very specific way that you want it to." 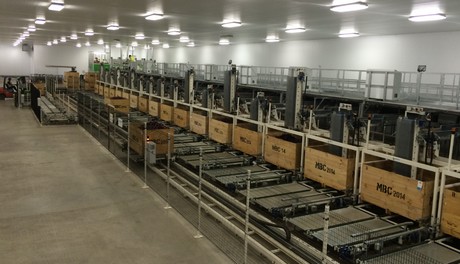 The sorting plant at the Moulton Bulb Company in the United Kingdom. This is the largest onion sorting line in the world.


Longobardi has sold ten sorting machines in Europe and the USA, one of which was bought by Wiskerke Onions in the Netherlands. "We are looking for leaders in the market and we found them in the Netherlands at Wiskerke Onions and in the United Kingdom at Moulton Bulb Co. At the company in the U.K. we have placed the largest onion sorting line in the world with external and internal quality sorting. It is a machine with twenty box fillers that are only used for pre-sorting. Soon this sorting line will be running 24 hours a day with a capacity of approximately 30 tons per hour. Count your profit," laughs Erik. "Wiskerke uses the machine mostly for the small packages department. There the machine runs for 16 hours a day, and there is a substantial amount of labor saved there with this machine. Reading is no longer necessary. However, staff is still used during the 'pre-read' to take the biggest tare away, but the machine does the rest." 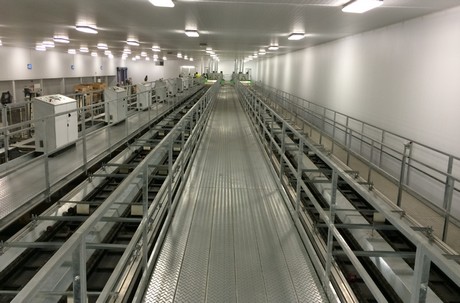 ...with a capacity of approximately 30 tons an hour.

Another way to process
The Dutch Business Development Manager was surprised that Dutch onion packaging stations in the infrared sorting process were not moved over to the internal quality process. "This is partly due to the fact that there are a number of companies that do not have the space for the new sorting line. Yet you go to a different way of processing. I am convinced that companies will be compelled to switch over due to both the quality and the cost. Personally, I expect that there will only be twenty companies, at the most, left after roughly 10-15 years. The companies that do not have an optical sorter yet will either want to buy one, will buy one or will be forced to buy one, or they will outsource this work, or they will stop altogether. This is where its at. Worldwide, I estimate that there there is room on the onion market for 150-200 more machines."

Most of the optical sorting machines have a condition that the competition is welcome to look at the installations. "For us, this is also something that helps promote our product. In the U.S. as well, the doors are wide open for the competition to take a look. For example, in Washington State we have an onion packaging station in which every producer/packager can send a truck full of onions, and we will run the onions through the machine with our customer in order to see if we can fulfill their expectations," says Erik. He does not fear competition from other machines manufacturers. "Competition is good. The key to the machines and equipment from Longobardi and Sammo is the combination of infrared technology and use. With this we are now seeing the best results in the area of internal quality sorting worldwide. There are cheaper systems on the market, but those are all slightly modified fruit sorting machines. If you are only concerned with price, then Longobardi will not mean much to you." 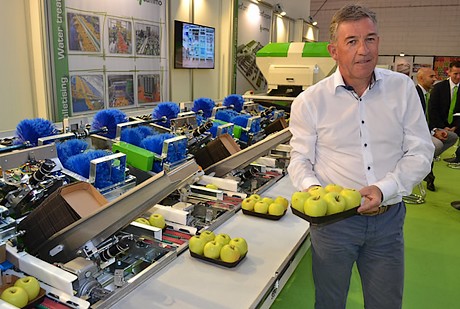 Erik Leerdam during the Macfrut event

When Erik is asked if they can guarantee that a bag full of onions, that has been sorted by their optical sorting machine, will contain no rotten onions, Erik answers by saying: "The chance that you will find a rotten onion is, in any case, a considerable amount smaller. During a good season with little rain quality problems will not be that big, but when the weather is less cooperative the investment in an optical sorting machine will be quickly recovered. Sometimes there is very little wrong with the onions when they are put in the container and shipped off, but after traveling for three or four weeks the problems can only be seen once the container is opened again. The worse weather conditions are ideal for packagers with the optical sorting machine, because then they can really distinguish themselves from the rest. We recently delivered an optical sorting machine to a relatively small onion company in Scandinavia. This was a considerable investment for them, but they will make it back in two years time. Their onions will sell for more and for the extra quality even more will be paid."