The Zimbabwean blueberry season is at its peak and two packhouses east of Harare are running packlines with Flowberry mechanical sorters, installed by Flowpack Systems based in Grabouw, Western Cape.

“The thing with Zimbabwe is they’ve got very good conditions for growing blueberries, and they don’t get a lot of quality issues, for instance soft berries. Therefore they’re not really in the market for optical sizing. They’ve got very little rain in the harvest season and they come into the market early. They generally just need to size their berries, which is where our mechanical sizers come in.” 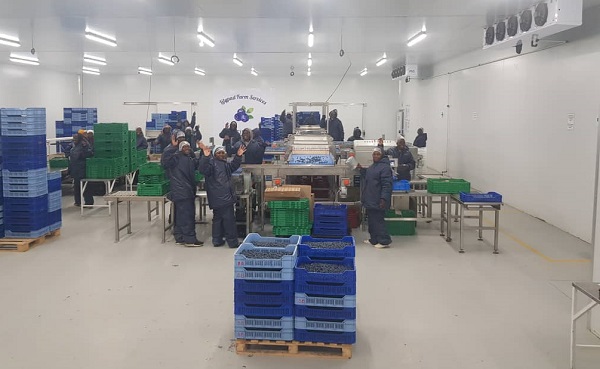 Ellips lines with Flowberry mechanical sorters for blueberries in a packhouse east of Harare, Zimbabwe (photo supplied by Flowpack Systems)

These packhouses were packing blueberries by hand until now. Rory adds: “Our mechanical sizers are fairly easy to fix, with not a lot of high-tech parts and packhouses can pretty much fix most of the equipment on their own.”

On one of their packlines in Zimbabwe, Rory and his team installed automated bulk fillers, a weigh-and-fill system for boxes and 600g punnets.

“We’ve got some local weigh-and-fill solutions that we do which have been very successful and which is going to be a big advantage of our lines in future.” 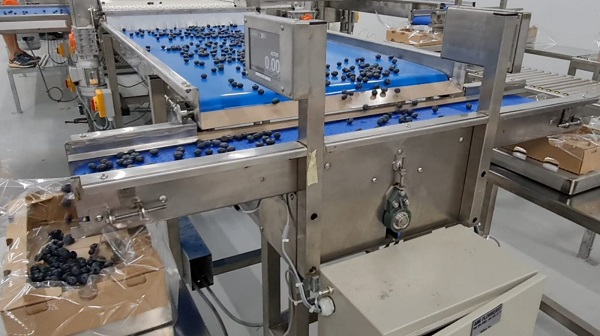 The automated scales that ensure smooth flow and no bottlenecks

He observes that weighing, filling and packaging is a big challenge on a blueberry packline.

“It’s easy to get big volumes over the lines and the sizers: you can get up to 1.5 tonnes of throughput per hour on the mechanical sizers. That can create a bottleneck on a lot of the packlines. So on the packing side you’ve got to be able to handle 1.5 tonnes of fruit coming over and put it into packaging.”

Optical sorting necessitated by freight costs
“In South Africa blueberries destined for sea freight and air freight are separated because of a better margin on sea freight but you have to have a harder berry to survive the sea voyage, and that’s where multispectral infrared cameras on optical sizers come in,” he explains.

“Optic sizers are becoming more important because of freight costs, especially over the last couple of years since Covid.”

Flowpack Systems, which is the South African agent for Ellips and Elifab, carries all of their spares at the factory, even for the optical sizers. “We’re not reliant on importing spare parts, we’ve got the stock here for all of our imported equipment,” Rory says.

Flowpack and its partners, AME Fruitsizers, has about 70 Ellips systems running in South Africa, grading and sorting a wide variety of fruit including two Elifab optical sizers which, he says, are running very well.

“If you do a good job, word gets around, and farmers are loyal if you look after them and you provide a good service.”