The global supply of pineapples is short and unpredictable mainly due to shipping issues. As the European summer comes to an end demand is also falling. In North America supply has been steady but tight, again due to shipping issues. Demand has been good through the summer. In the Southern Hemisphere South Africa has seen short supply as one of the growing regions experienced drought conditions, supplies are coming back on line now. The Mid-Autumn Festival is expected to boost pineapple sales in China. In Australia where supply is 100% from domestic growers, they are seeing good returns on new varieties. 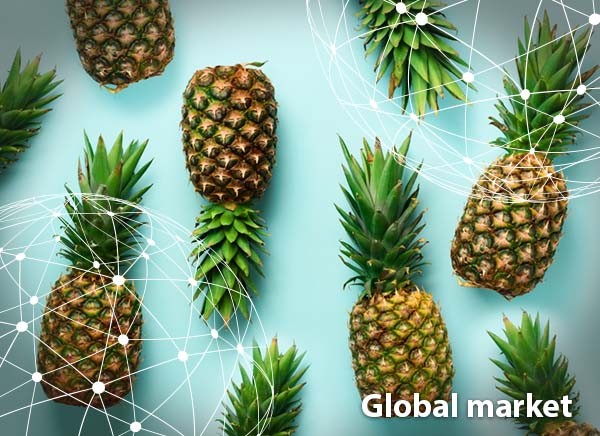 The Netherlands: Good demand and prices after a dip at the beginning of the summer
The Dutch pineapple market can look forward to good demand. “We had a small dip at the beginning of the summer, from the end of June to the beginning of July, but after that the market picked up. It was unpredictable with many shortages and high prices, but in general the demand has been very good, especially for a summer period," notes a Dutch importer. There was a shortage in large sizes, in particular, but now that supply is starting to pick up again. Prices are still around 12.50 euros, which is quite high, but given all the increased costs, a price increase was also necessary.”

Italy: Lower sales as summer ends
The Pineapple market in Italy is seeing a slight decline in prices. A pineapple importer from northern Italy says that, in the summer, pineapple prices were brighter while they are now declining slightly. "In the first week of September, the market is slowing down. The product comes from Costa Rica and shows very good quality. Consumption, however, is falling and will remain medium-low until the beginning of December: near the Christmas holidays there will be a rush to buy the fruit, with strong demand and rising prices."

Also according to a wholesaler from southern Italy, pineapple is a product that finds an easy market during the summer, especially in the retail trade and the hospitality sector. "In the summer months, high temperatures push up wholesale sales of exotic fruits such as pineapple. At the moment, marketing is going very well, and we hope that this trend will continue. The size 7 product is imported from Ecuador. Prices are reaching a level of €1.50-1.60/kg."

According to the GfK Consumer Panel observatory, almost 9.6 million households bought pineapples in the year ending July 2022, i.e. more than 37% of the population. Organically grown pineapples maintain their number of purchasing households at around 1.7 million.

France: Very high prices for pineapple from Costa Rica and Ivory Coast
According to an importer at Rungis, the pineapple market is very difficult at the moment. Temperatures have been relatively cold in Costa Rica and Ivory Coast, so the market has risen very strongly. With the increase in the price of fuel and containers, pineapple prices are rising, up to 13 euros per package. As for coloring, "We don't have what we want because we have mostly 1-2 coloring when we want 2-3. And the few goods with a 2-3 coloring can reach 14 euros per package. In terms of demand, with the stone fruit campaign coming to an end, consumers are beginning to turn to more winter products, and consumers are throwing themselves at pineapple."

Germany: Difficult supply situation, high-priced market
In Germany the pineapple market is characterised by high prices and a tight supply situation. Costa Rica dominates the current supply in the trade. Due to the tight supply situation, certain premium brands and pre-ripened goods can only be traded in small quantities at the moment. "The after-effects of COVID are particularly noticeable in the case of airfreight goods. There is a lack of staff at the packing stations at the origin, which cannot be increased overnight. The same applies to the high freight costs with which we are still struggling," says a specialized wholesaler.

North America: Shipping curbs Pineapple supply
On the North American market supplies of pineapples are steady though tight. One shipper notes that some of the larger tropical fruit shipping companies aren’t sending over as many supplies. “They have huge boats and if they were shipping bananas for example, if they had any extra space, they’d fill it up with pineapples and those would be extra supplies here,” he says. “What they’re doing now is selling freight instead. They bring in the pineapples they need for contract though, but not the massive amounts of pineapples they used to bring.”

This shipping pattern has been happening for at least six months in shipping fruit largely from Costa Rica. (Though Mexico is also currently bringing in some pineapples.)

Meanwhile demand has been good for the tropical fruit. “It did kind of fall off in the past few weeks but if you’re at the right price, people will buy. We dropped the price a little bit and people are buying again,” says the shipper, noting that pineapples can be price-dependant given they’re not a staple produce item for households as, say, apples or potatoes would be.

However this recent shipping pattern has kept the market relatively strong at between $17-$20 for the past few months. “They’re saying it’s going to last another six weeks as we get into October. We may get a little extra volume and see the price drop a little bit. But I don’t see the market getting down to $7-$8 like it used to,” the shipper says.

South Africa: Pineapple volumes on the low side but expected to start picking up from next week
Pineapple supply on the South African market is expected to pick up next week. “Supply has been short over the past two weeks but it’s a temporary thing. Pineapple growers are going through a bit of a drought in Hluhluwe in KwaZulu-Natal which is affecting sizes. There are a lot more small fruit coming to market, not a lot of sizes 8s and 10s. The majority is size 12s,” says a pineapple trader at the Johannesburg fresh produce market.

Costa Rica’s Minister of Foreign Trade Manuel Tovar Rivera, as well as the Israeli Agriculture authorities, jointly celebrated the arrival of Costa Rican pineapples in Israel. The Costa Rican grower and exporter Upala Agrícola is the first company to have completed the necessary requirements and certifications to reach the Israel market.

The aim is to steadily grow the market, meet the requirements and showcase to Israel that Costa Rica can supply the desired specification of pineapples. Costa Rica joins the Dominican Republic who count Israel as one of their major pineapple export markets.

The small island nation, is also focusing on returning their export supply of pineapples to pre-pandemic levels in other markets such as Europe, especially as airline schedules have returned to normal with more frequent flights. This allows more pineapples to be airfreighted to world markets as tourism has returned to the Dominican Republic.

China: Mid-Autumn Festival to boost pineapple sales
March last year, Taiwanese pineapples were banned from entering mainland China due to 'harmful creatures' that could affect the crop. According to Taiwan’s Council of Agriculture, the island produces 420,000 tonnes of pineapple annually, of which 10% was exported to China a year ago. The ban has benefitted other export markets to China, including Malaysia.

China produces pineapple in Guangdong province, Hainan Taiwan and Guangxi. The total output of Guangdong and Hainan combined makes up 85% of total domestic production. Next week China celebrates Mid-Autumn Festival. This is a usually strong period for fruits and imported fruits and an opportunity for Philippine and Malaysian pineapples. In August it was announced that Indonesian pineapples received market access to China.

Australia: New varieties seeing high returns for growers
The Australian pineapple market is 100% supplied by domestic production. Growers who are producing three of the latest locally-bred commercial pineapple varieties are receiving significantly higher returns, according to the fresh produce company responsible for distributing and marketing the fruit. Even though there is an added cost to grow the varieties in the form of a royalty, the company says those farms who have planted the Aus-Jubilee, Aus-Carnival and Aus-Festival are getting more than their money's worth back.

"Having a look at last year's returns, after the royalties, the crops performed over and above the standard Gold variety, which is again over and above the standard smooth variety. I think it depends on the month, as to what the difference in evaluation on price, but some months it is 28 per cent higher. We try to always have it as a premium product and the Aus-Jubilee is probably the most popular (and the first released), especially through winter and we are getting good traction."

The first plants were put into Yeppoon, in Central Queensland, on a very small scale. The number of plants has grown from only 16 to over two and a half million today. The plan with the three varieties is to create a point of difference in the market so that consumers look for the fruit by name and this allows growers and wholesalers more pricing power.

According to Hort Innovation's Australian Horticulture Statistics Handbook, for the year ending June 2021, 71,084 tonnes of pineapples were produced (an 8% increase on the previous year), valued at $46.8million, with 34 per cent sent to be processed. All supply remains on the Australian domestic market with no imports or exports recorded. At a retail level, 40 per cent of Australian households purchased fresh pineapples, buying an average of 1.1 kg per shopping trip.