The domestic cherry season has clearly passed its peak, as availability declined noticeably. Local offers predominated, but obviously lost a lot of their presence. Turkish imports also weakened, according to the BLE. Meanwhile, shipments from Poland intensified significantly. Products from the Netherlands and Belgium did have more than a supplementary character, Spanish and Greek goods arrived only selectively. 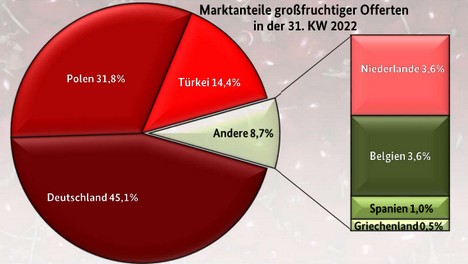 Quality was no longer consistently convincing, and low-condition batches inevitably led to discounts. However, prices were also on the rise: Larger caliber Belgian lots in Frankfurt and Polish lots in Berlin were expected to cost up to €8 per kg. In general, demand was sufficiently satisfied. Nevertheless, as the campaign drew to a close, prices often rose. In particular, the more opulent calibers from 28 mm upwards became more expensive, as in some cases they were only supplied in scarce quantities.

Pears
There was movement in the assortment: Chilean Abate Fetel and South African Trout noticeably lost in importance. On the other hand, the first Italian Santa Maria appeared. The first domestic Williams Christ and Conference also arrived; they flanked domestic Clapps Liebling, which were now available in Frankfurt and Cologne.

Strawberries
Domestic batches dominated over Dutch, Belgian and Polish goods. The season was slowly but surely turning into its home stretch. Although the availability of strawberries had increased again, demand seemed to have decreased significantly. Access could sometimes be quite poor.

Apricots
French deliveries dominated. Turkish sugar apricots had, in line with the seasonal status, noticeably lost importance. Italian and Spanish deliveries were no longer able to go beyond a supplementary status. High-priced domestic fruit completed the picture, as did low-priced imports from Moldova and Poland.

Peaches and nectarines
Italian and Spanish shipments gained in strength once again, so availability increased steadily. French and Turkish inflows rounded off the range of goods, Greek ones appeared exclusively in Berlin and Frankfurt. In general, the organoleptic characteristics rarely left anything to be desired.

Plums
The assortment changed noticeably: Lepotica from Bosnia and Herzegovina and Katinka from Germany lost relevance. In contrast, deliveries of Lepotica from Moldova and Serbia as well as Top from Germany increased. Recently, domestic Jojo, Ortenauer and Auerbacher were ready to join Hanita, Cacak's Schöne and Top.

Lemons
South African and Argentinian goods dominated, with Spanish exports completing the range of goods. Overall, shipments had increased slightly. They were sufficient to satisfy demand without effort. In terms of prices, not much happened.

Bananas
There was an unexciting hustle and bustle to be observed without any highlights. The holidays and the heat noticeably limited sales. However, traders adjusted their supply to the reduced demand, and reduced it sufficiently.

Cauliflower
Local offers prevailed, almost monopolistically. Only in Frankfurt there were still Dutch articles to be found. The holidays and the high summer temperatures greatly reduced the demand. Nevertheless, the prices tended upwards in various cases.

Lettuce
In the case of iceberg lettuce, there was a preference for domestic products. In Frankfurt, Cologne and Berlin, there were also Dutch shipments, which customers preferred. In the case of lettuce, domestic and Belgian products were available on all markets.

Cucumbers
Regarding cucumbers, the range was made up of domestic, Dutch and Belgian offerings. Supplies shrank somewhat, but were generally sufficient to meet demand. Nevertheless, prices rose in some places. However, this factor, combined with a not always convincing quality limited demand.

Tomatoes
Shipments from the Netherlands and Belgium continued to form the basis of the supply. Availability had increased noticeably. Regular tomatoes mainly came out of Poland and TOVs from Germany. Italy participated exclusively with cherry tomatoes. Demand was not particularly strong.

Sweet peppers
As in previous weeks, Dutch batches dominated the scene. Turkish and Belgian lots followed in terms of importance. Local products played only a selective supplementary role and cost between € 2.80 and € 4.60 per kg in Frankfurt. The supply was sufficient to meet demand. Nevertheless, prices often changed.