Reduced seeded acreage in 2022 due to multiple factors

Statistics Canada released their first estimate of potato acreage in Canada as a result of data obtained from their survey of potato growers in Canada. The 2022 potato acreage is estimated at 385,128 acres. This is almost flat compared to 2021; only 242 acres more than last year.

In 2021 acreage had seen a big increase over 2020, and even the pre-Covid year 2019, predominantly in the major processing provinces, bringing supply back to meet demand increases in the industry that began pre-Covid. However, due to significant rises in input costs, fertilizer and fuel predominantly, coupled with increased holding levels in some of the Eastern provinces, we have seen reduced seeded acreage in 2022. 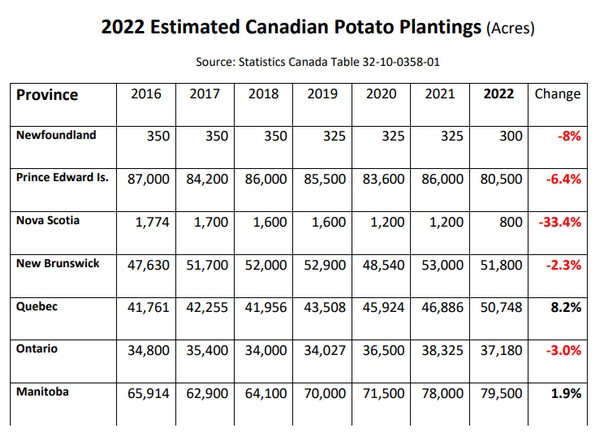 The largest acreage increase in 2022 was reported in Quebec, planting an additional 3,862 acres representing an 8.2% increase over last year. However, due to an overabundance of rain combined with cool temperatures throughout the planting season, Quebec has advised that this number may not likely be realized as harvested acres, similar to certain other regions across Canada.