Local strawberry offerings prevailed. Their presence had become immensely limited. It was a good thing that the demand had also noticeably limited, a certain saturation could not be denied. In addition to the early start of the season for this year's campaign, the holidays also played a role, according to BLE. Customers were also looking out for stone fruit and cherries rather than strawberries this week. This meant that sales dropped. Therefore, marketers had to lower their demands if they wanted to avoid stocks. 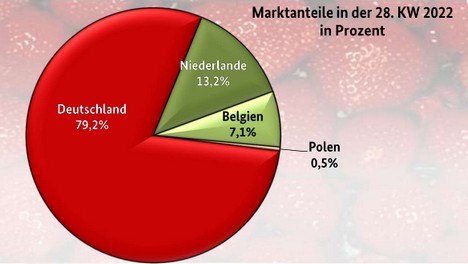 In some cases, the reductions were also quite hefty. However, even with the reductions, surpluses could not always be prevented. Even the prices for organoleptically very appealing goods plummeted. If the marketers insisted on higher prices, customers often refused to buy. Only Munich reported increased prices, caused by reduced deliveries. Fruit from the Netherlands, Belgium and Poland had a supplementary character. Their importance had also decreased, which is why prices sometimes increased as a result of volume.

Apples
The new domestic season made itself increasingly felt: Piros, another variety, appeared, joining the already established Lodi. Overall, business was quiet and prices did not change significantly. This was also the case with imports from overseas.

Pears
No serious changes were discernible either in the range or in demand and prices. South African and Chilean goods still predominated, with Dutch, Belgian and Argentine pears rounding out the product range. New additions to the range were various summer pears.

Table grapes
Italian fruits obviously dominated the scene: Victoria, Sugraone and Black Magic, however, lost relevance. The first Michele Palierie appeared in Frankfurt, where they cost between €2.80 and 3.15 per kg. The importance of Egyptian Flame Seedless and Prime Seedless also diminished. On the other hand, deliveries from Spain increased.

Apricots
The assortment was primarily composed of Turkish, French, Spanish and Italian goods. Lots from Moldova, Hungary and Greece completed the scene. Domestic lots were the most expensive, but still generated sufficient attention. Overall, demand was not particularly strong.

Cherries
Domestic and Turkish items dominated the scene, with Belgian and Spanish supplementing. In general, demand could be met without much effort, as sales  were usually somewhat limited. From Germany often came Kordia and Regina, which rarely left anything to be desired in terms of their organoleptic qualities.

Peaches and nectarines
Spanish batches obviously predominated over Italian and French lots. Local, Turkish and Greek produce complemented the action with small quantities. Yellow nectarines in AA and AAA calibers were favored by customers, while smaller sizes and peaches in general tended to be neglected.

Lemons
The supply consisted mainly of South African, Argentinean and Spanish deliveries. There were also some Italian fruits, mostly untreated. Demand was very restrained and could not always keep pace with the volume of the product range. Sales options had become limited.

Bananas
Supply and demand generally balanced each other out sufficiently. As a result, traders very rarely had to make corrections to their prices. In Frankfurt, third brands initially became more expensive before becoming cheaper again towards the weekend.

Cauliflower
The summer temperatures had a noticeable effect on sales. There was a noticeable drop in demand. Only Munich reported steady demand and prices. Otherwise, ratings were trending downward in unison.

Lettuce
In lettuce, there were Belgian and domestic offerings. The former had the edge in terms of quality, which is why they increased in price in certain areas. With a rather weak demand, the domestic batches were cheaper in some places. Iceberg lettuce was sourced domestically and from the Netherlands. The marketing of colorful lettuces was unexciting.

Cucumbers
The assortment consisted of Dutch, domestic and Belgian offerings. Availability was sufficient to meet demand. Prices did not show a clear line, all in all they tended to go up rather than down. However, the changes were all within limits.

Tomatoes
Dutch and Belgian deliveries apparently formed the basis of the range. Supply obviously expanded and it was easily sufficient to meet demand. The summer weather had improved sales. Prices showed no clear trend.

Sweet peppers
Dutch shipments dominated over Turkish and Belgian. Offers from Poland and Germany rounded out the unexcited action. Prices rose frequently, with yellow products in particular increasing in price. The reasons for this were intensified demand and increased purchasing requirements.