'Start of the holidays in parts of Germany reduced accommodation options'

The availability of primarily domestic table early potatoes apparently expanded, the BLE said. Here, domestic Annabelle and Berber set the tone. Demand, on the other hand, had narrowed: The start of the vacations in parts of Germany reduced accommodation. As a result, traders had to accept a volume-induced malus. In the case of stocked goods, subsequent deliveries were discontinued locally, which was also reflected in sales. In Munich, trading in Cypriot annabelle was further curtailed after prices here were meanwhile well above the level of competitors due to purchasing costs.

Rhineland-Palatinate: German early potatoes determine ranges
German early potatoes dominate the assortments. Early imports more or less supplement the range. Food retailers are mainly supplied with regional produce. Producer prices were reduced this week. As demand is not quite keeping up with the good supply, also due to high summer temperatures, prices are expected to tend to fall. The upcoming summer vacations could further reduce sales, the Rhineland-Palatinate Chamber of Agriculture writes. 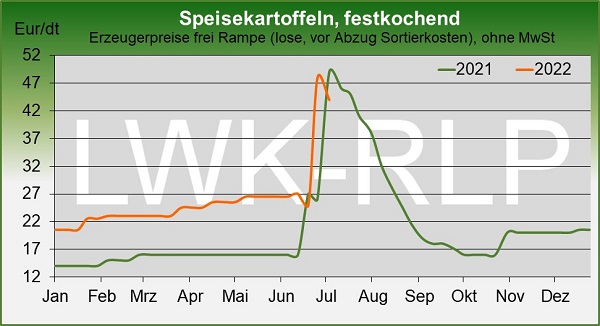 Hesse: Gradual changeover to German early potatoes
The marketing of new potatoes is proceeding quietly. The steadily increasing supply in satisfactory qualities can comfortably meet the relatively restrained demand. Compared to the previous week, prices have been corrected downwards significantly. Imported goods (from Spain) are still available at prices below the local origins. There should now be a gradual switch to German early potatoes in the food retail sector. The stocks at the connecting locations depend on the amount of water available. Precipitation will be welcomed by farmers, according to the State Office for Agriculture in Hesse. 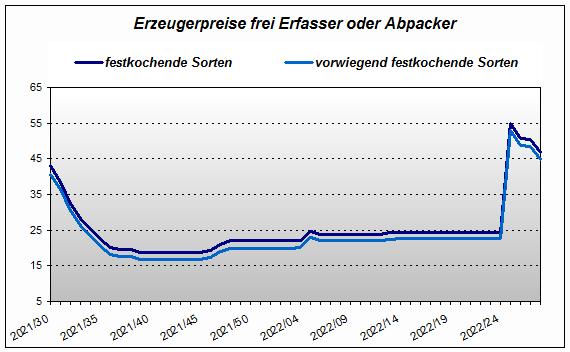 Schleswig-Holstein: holiday-related, quiet demand
In this state, trading activity on the potato market is restrained, the Schleswig-Holstein Chamber of Agriculture reports. Among other things, demand is described as slow due to the holidays. Prices are falling and a further price decline is expected towards the weekend. The supply in the stores continues to be determined by supra-regional early potatoes, for example from the Palatinate. The switch to regional early potatoes is taking place slowly.

Meanwhile, firm-skinned potatoes are also available in Germany, but loose-skinned potatoes can still be found in food stores. In addition, there are still imported potatoes on the market, which are believed to be residual stocks. The stocks continue to develop well. The rainfall in recent weeks has had a positive effect on crop development. In southeastern Schleswig-Holstein, the weather was drier. regarding early potatoes; there are occasional problems with scab, otherwise quality is generally good. The late blight pressure is currently no longer so great.