"Good prices tarnished by the excessive increase in production costs"

According to ASAJA-Almeria, this campaign was atypical for horticultural producers in the province. "The 21/22 campaign left the sector with a bittersweet taste. If we only pay attention to the unusual prices that were achieved, one would conclude that farmers could end the campaign with significant profits. Unfortunately, the exorbitant increase in production costs has tarnished a good campaign," the Agricultural Organization stated.

The provincial president, Adoración Blanque, analyzed the last agricultural year and highlighted the trend experienced by pepper in recent years, which has become a leading horticultural production in the province exceeding 12,627 hectares and replacing the position that tomato had years ago. Tomatoes, beans, melons, and watermelons are the products that have lost the highest production value in this last season, unlike the rest of the products. As a whole, the province's production value increased by 8.5%. 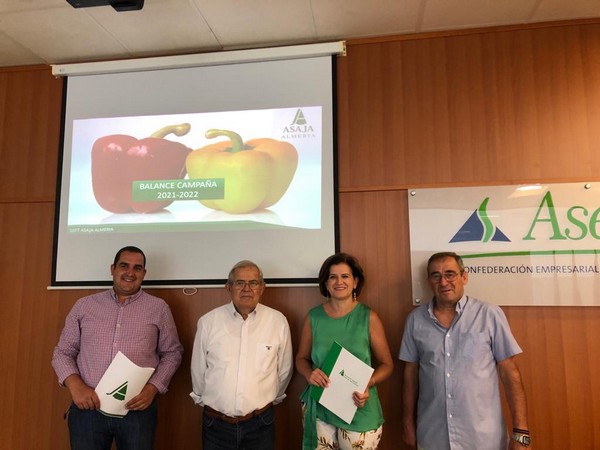 "In fact, according to the data collected, one of the key aspects of this past year was the presence of more area, which according to our calculations, increased by 1.2% or nearly 32,700 hectares of horticulture. There's also been a 1.4% decrease in the area destined for production reaching 49,463 hectares that led to a 17.5% decrease in production, which totaled 3,6 million tons."

ASAJA expressed special concern about the situation lived by outdoor watermelon producers because, despite achieving acceptable prices for their product, it wasn't a profitable campaign for farmers due to the decrease in production volume. There was a 20% decrease in the production volume this year and a detriment marked by different external factors that have affected the profitability of the productions.

"Costs have been the determining factor in the outcome of the campaign. Operating costs increased in a single campaign by 30.8%, which in monetary terms means an increase in expenditure of 16,516 euros per hectare on average. In addition, the expenses of amortization of the holdings increased by 49.5%, amounting to 6.602 €. Thus, total yearly expenses amounted to 23.179 €, i.e., 34.5% more than in the previous campaign."

The campaign product by product

"There was less competition from third countries such as the Netherlands or Belgium. They had to reduce their production considerably because of the amount of energy they use to produce and the increase in costs, which gave a respite to the tomato market in Almeria," the organization highlighted.

Pepper
Pepper, which continues to be the leading product by surface area in the province since it overturned the tomato three years ago, increased its area by 2%. However, production has declined by an average of 9.5%, and its average price has declined by 6%. As a result, the value of the marketed production decreased by 14%.

Zucchini
The area devoted to zucchini also increased by 2%, but its production decreased by 22%. However, its average price stood at 79 cents/kilo, 41% higher than last year. This is why the value of production increased by 33%.

Cucumber
There was a very slight decrease in the surface devoted to cucumbers, and production fell by 13% over the previous campaign. In contrast, the average price increased by 29% and stood at 61 cents per kilo, increasing the product's value by 12 percent.

Aubergine
There was a 1.5% increase in its surface, although its production decreased compared to last year. The average price increased to 62 cents, although this increase has not mitigated the 4.9% decrease in the value of the marketable production.

Green beans
This product continues to gradually disappear due to high production costs and competition from third countries. There were 95 hectares devoted to it, production amounted to 2,000 tons, and the value of the production fell by 15%. However, there was a slight increase in its average price, which stood at 178 cents per kilo.

Melon
The production area for melon decreased by 5% in this campaign, and the production fell by 38%. The average price stood at 70 cents, 159% more than last year. As a result, the farmers of these fruit and vegetable products have managed to maintain some expenditure, albeit without the expected profitability.

Watermelon
The surface area used for watermelon crops decreased by 6%, and production fell by a whopping 41%. The average price skyrocketed this season to 64 cents/kilo, leading to a 77% increase in the value of its marketable production.

Regarding the outdoor watermelon campaign, ASAJA emphasized that, even though it's about to end, the results achieved so far show that it was a turbulent campaign, and producers did not reach the expected profitability at first, unlike what happened with the early greenhouse watermelon. In addition, it is very likely that, as a result of the drop experienced in recent days, the average price for all watermelons in the province of Almeria would decrease slightly.