In the Italian province of Brindisi

Settembrino figs are being harvested over the weekend in Apulia

In the Italian province of Brindisi, the Petrelli green fioroni fig season has ended and, in the next few days, the Domenico Tauro black fioroni season will also be completed. The second part of the campaign, with the harvesting of the first fruits known as settembrino figs, will start on Saturday, 16 July 2022. 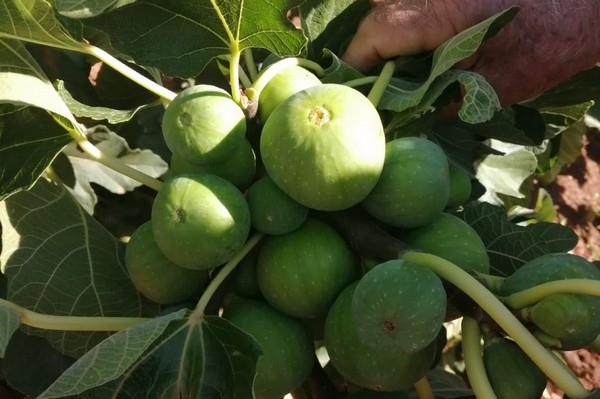 Settembrino fig, to be harvested this next weekend (photo provided by Francesco Palasciano)

"This year is quite particular. First of all, the crisis due to the pandemic combined with the war and the increase in prices is pushing consumers in northern Italy and abroad to buy less or not at all," says Francesco Palasciano, owner of Cuore Verde. We are really worried not only about figs, but also about other fruits and vegetables. The cultivated areas are more than halved. The general price increase on production, transportation and packaging (plastic and wood) is really disproportionate and it is not reflected in the final price of the product. While there is less fruit, sales are struggling to take off, said Francesco Palasciano, owner of the Cuore Verde company. "

An additional factor to this scenario is the shortage of labor, due to both the citizen universal basic income and the generational transition. "The new generations, in fact, do not accept this type of work, and the training of immigrants, in many cases, does not yield the desired results because of a cultural gap that cannot be met," said the business owner. 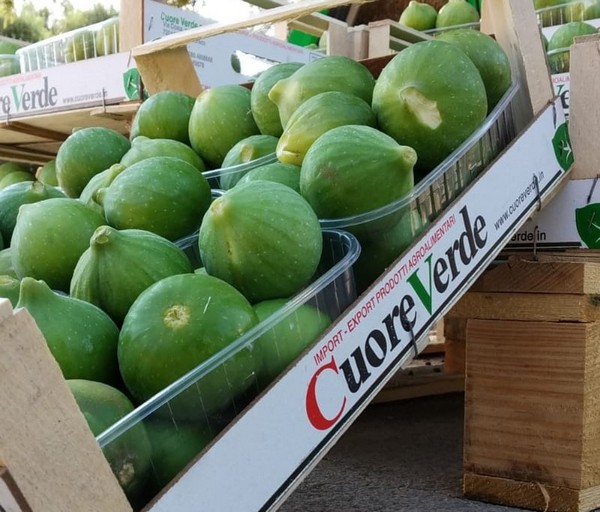 Settembrino figs in baskets. The campaign will start this weekend (photo provided by Francesco Palasciano)

Palasciano also pointed out another anomaly that has never before been recorded for the production of flowering figs. "We did not have a gradual harvest. The product ripened all at once, when we usually start with the earliest fiorone in the coastal areas."

For the green and black fiorone priecs are lower than in other years
Without commenting on quotations, Palasciano emphasized that this year's florone figs prices were lower than in past campaigns. "We have been working with the green fiorone on both domestic and foreign markets, but since it is a delicate product with a shorter shelf life, we have to be very careful about its handling and humidity Exports of the black fiorone, on the other hand, were facilitated by the better storability that the Domenico Tauro variety holds. We can say we have stood up better."

For the Settembrino fig prospects are good but there are many uncertainties
On the new Settembrino fig campaign, starting Saturday, 16 July 2022, Palasciano is looking to be optimistic. "At the moment, the prospects are good, but it is scary that consumption has dropped, and people are spending less. Also, for the past few days, it has been raining. Humidity is the enemy of the September fig, as are excessively high temperatures. We will see what happens, considering that already in May we had recorded the same heat levels as in a typical month of July." 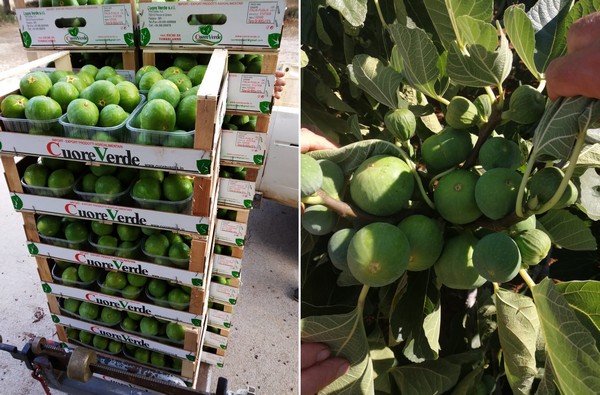 Settembrino figs in baskets and on the plant. The campaign will begin from this weekend photo provided by Francesco Palasciano)

"With climate change under way, in the case Italy's economy recovers, perhaps it will be good to opt for the cultivation of exotic fruits, as some producers are already doing," concluded Palasciano.