Inflation continues to dominate the trade and consumer headlines.

“While consumer money-saving efforts when buying groceries are plentiful, it is important to note that it is not a race to the bottom nor a complete abandoning of restaurant visits,” said Jonna Parker, team lead fresh at IRI. “However, the 40-year high inflation does mean consumers are much more strategic about their grocery and restaurant choices.”

According to the June edition of the IRI monthly survey of primary shoppers, consumers are applying many of the lessons learned during the Great Recession to tighten spending.

Fresh produce prices were up from last year, at +8.0 percent level on a per-unit basis and +7.0 percent on a per-pound basis. Unlike the beginning of the year where inflation was predominantly driven by fruit, it was vegetables that reached +8.2 percent inflation in June 2022 versus June 2019. 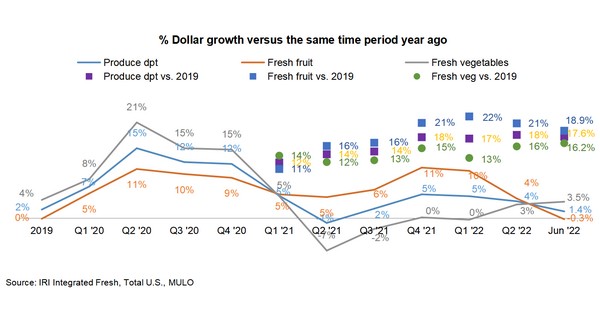 In the first quarter of 2022, just under 80 percent of total fruit and vegetable dollars were generated by the fresh produce department. The share of fresh produce dollars in the second quarter ticked up to 82 percent and reached 82.8 percent in June.

“Berries had slight dollar sales in June of +0.8 percent but pounds were flat,” Parker said. “Mixed fruit and mandarins dropped out of the top 10 and peaches and pineapples made inroads. Volume sales were a mix with increases for grapes, oranges and pineapples but down results for all other top 10 sellers.”

“June’s vegetable performance was very mixed,” said Watson. “Seven out of the top 10 sellers increased dollar sales but only potatoes and onions had volume increases.” 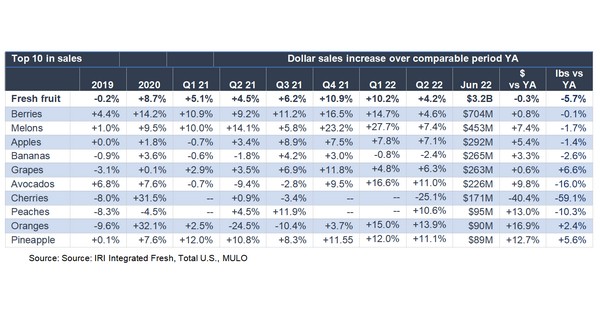 In June 2022, fresh fruit added $78 million in sales and vegetables added $93 million compared to June 2021. “The top 10 in absolute dollar gains shows the rising impact of inflation which tends to push shoppers to versatile cooking basics and cost-effective fruits, generally with an eye on shelf life,” said Parker.

The next report, covering July, will be released in mid-August.