Light at the end of the tunnel for shippers?

After more than two years of chronic delays in container shipping, shippers are finally seeing improvements in both transit times and port delays, according to the latest metrics measured by Drewry Shipping Consultants.

Since January, port congestion in North America, the most congested region, has halved from 20 times the norm to about 10 times the norm, based on the Automated Information Systems (AIS) measurements analyzed by Drewry in the latest Container Capacity Insight. Transpacific eastbound “best case” transit times (from the last port in Asia to the first port on the West Coast of North America) have shortened from about 34 days in January to 20 days last week.

Port congestion in North America, Europe, Asia, the Middle East, and Oceania remains elevated by historical standards. The most impacted region remains North America, where the congestion has improved more on the West Coast than on the East Coast, as shippers worried about the negotiations between the International Longshore Warehouse Union (ILWU) and the Pacific Maritime Association (PMA) shifted volumes to the East Coast. 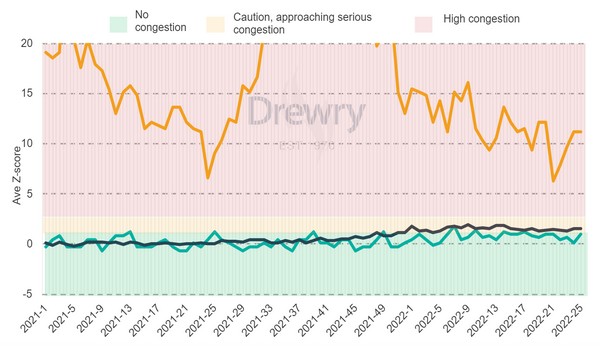 Since the start of this year, New York ship waiting times for a berthing window have averaged 3 days, growing to 5 days in the last four weeks. The adjacent port of Baltimore has been in the green so far, averaging less than one day of waiting time, thus representing a faster alternative for cargo destined for this region.

The port congestion metrics for neighboring ports and the transit time trackers are technology-supported tools provided to shippers by Drewry to support routing decisions and planning. 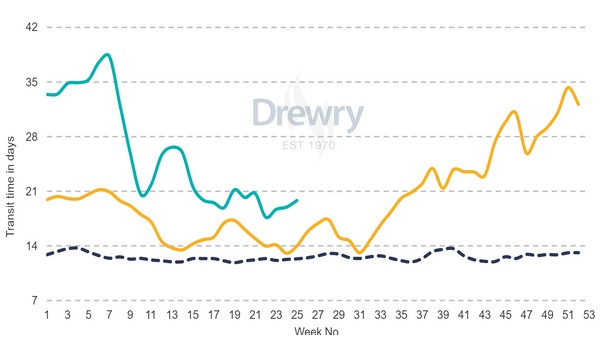 The tools and market insight are updated weekly in the Container Capacity Insight. Transit times of the major East-West ocean services, another key factor of the containers’ journey, remain much worse than the pre-pandemic benchmark (2019), but we see an improvement in the latest weeks, as illustrated in the bottom graph.