'New to the cherry range were shipments from Serbia, Bulgaria and Slovakia'

Domestic sweet cherries dominated the scene, more so than Turkish ones. Spanish, Italian and Greek items followed in terms of importance, but all lost relevance, according to BLE. Belgian imports were offered in very small quantities in the previous week, but obviously regained importance in the meantime. New additions to the range were shipments from Serbia, Bulgaria and Slovakia: Mostly Kordia were offered, which cost between €2.50 and €3 per kg in Hamburg, depending on the quality. 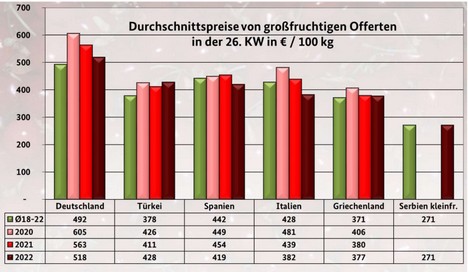 In general, the organoleptic properties were quite convincing. However, the summer weather did not necessarily result in increased access by customers. Instead, the increased availability often forced retailers to reduce their previous demands. Large fruits -from 30 mm upwards- were not completely excluded from the discounts, but of course the reductions were more likely to affect the smaller calibers.

Pears
The product range consisted largely of South African and Chilean imports. Inflows from Argentina, Belgium and the Netherlands were only of a selective, maximally complementary nature. Interest was very weak, with customers looking more for stone fruit than pears.

Table grapes
Italian supplies obviously dominated and once again expanded their presence. Flame Seedless and Sugraone were added to the range, joining the already established Victoria and Black Magic. From Egypt, Prime Seedless and Early Sweet were the main products.

Strawberries
Local offerings predominated. Supplies from the Netherlands, Poland and Belgium had at best a supplementary status. Availability had mostly expanded. In some cases, a wide range of quality was recorded, which in turn led to a strongly widened price gap.

Apricots
Shipments from Turkey, France, Greece and Hungary consolidated, while Spanish and Italian shipments lost some strength. Summer weather had a positive effect on demand, but prices still trended downward rather than upward as availability was simply too abundant.

Peaches and nectarines
The assortment consisted mainly of Spanish and subsequently Italian and French shipments. Only locally did Greek supplies appear alongside them. The availability had expanded. Interest was quite friendly, but could rarely keep up with the extended supply.

Lemons
Spanish, Argentine and South African items formed the basis of the range. In addition, there were still very few Italian offerings, mostly untreated. Demand was not particularly strong and was easily satisfied.

Bananas
Business was very slow. Supply and demand were sufficiently balanced, so that there was usually no reason on the part of traders to modify previous prices.

Cauliflower
Domestic batches predominated. Deliveries from the Netherlands, Poland and France were only of a selective supplementary nature. Interest was not particularly strong, it could be satisfied without effort.

Lettuce
Domestic and Belgian offers were available for lettuce. Belgian lettuce became more expensive on various occasions, while domestic lettuce sometimes became cheaper. Reasons for this included diverging quality or excessive supply. In the case of iceberg lettuce, there were primarily domestic and subsequently Dutch lots.

Cucumbers
The range of cucumbers consisted mainly of domestic, Dutch and Belgian deliveries. Only in Frankfurt did a small volume of Spanish supplies appear alongside these. The supply was sometimes too abundant, so that traders were not always able to avoid discounts.

Tomatoes
Dutch and Belgian deliveries obviously predominated. Their presence had expanded, as had that of domestic fruits. The supply situation had expanded noticeably. Demand, while not unfriendly, could hardly keep pace with the increased shipments.

Sweet peppers
Dutch, Belgian and Turkish products predominated in the range, with domestic and Spanish products supplementing it, the domestic ones in particular being of more interest to fruit retailers. Demand was not particularly strong.