USA citrus running at full tilt, but “not much is going on in Europe”

South African citrus: "The Russian market turned out to be actually very good"

Running a fruit exporting company feels a bit like being an operational company that happens to sell fruit at the moment, an exporter remarks, when managing logistics and fighting for space and equipment on vessels take up most of their days.

“You have to be passionate about fruit to be working in the fruit trade,” he says. “It’s not an easy place at the moment.” 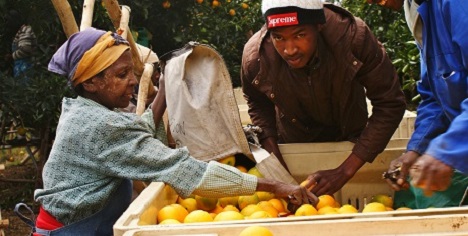 Slow Valencia start
Slow colour development on Valencias in Limpopo Province has meant at least two to three weeks of lost marketing opportunities, which, along with impediments to South Africa’s lemon and the grapefruit harvest, could explain why citrus volumes via Durban port have, thus far, not been as high as expected.

”As we move through the Valencia orchards of our growers, we don’t yet discern a median in terms of sizing and yield. It’s very early, we haven’t yet completed the puzzle but there could perhaps be less smaller sized Valencias count 105s (and smaller), than in a usual season, with a gradual increase in larger fruit perhaps peaking on count 64, 72, 56 range,” a Limpopo-based citrus exporter says.

He asked not to be named, but noted “a fresh breeze of excitement” around the Valencia types and navels from many markets - Russia, South East Asia, China, the Middle East. “We didn’t necessarily see this with the lemons or the grapefruit.”

The first South African CaraCara navels were reportedly sold for excellent prices in China. Orange exports to China are now picking up.

As for the buoyant USA market, less space is allocated for navels on the weekly vessels to North America than for soft citrus, exporters say, because of the strong pull for easy peelers.

The USA is empty and Europe is full, adding: "There's nothing much going on in Europe at the moment."

The elephant in the room is the new cold protocol on oranges to Europe which will have a massive impact on South African oranges. The industry is anxiously awaiting the fine print of what the protocol will entail.

"It’s been an interesting year on lemons. Initially the lemon export market expectation was somewhat recalcitrant, but soon signs came that retailers in the EU would be switching over quicker to Southern Hemisphere lemons, much earlier than usual,” he explains.

“The Europeans expected this tsunami of fruit from South Africa, so they were only willing to take fruit on open consignment, but we had more late rain than usual, also resulting in the KwaZulu-Natal floods, which held back harvesting, plus then the strike in the Sundays River in the Eastern Cape which held back their lemon packing, flattening the initial anticipated volume curve.”

This is the first year of sending South African lemons to China under a sterilization protocol. Very good prices were obtained on the first arrivals of South African lemons until the Covid lockdown in China, when there were no feet on the market and distribution was interrupted by periods of quarantine imposed between regions.

“Initially we’d arrived in a good window (although you have to keep in mind that there are Chinese lemons on the market twelve months of the year) and the arrival quality was very good. The initial price levels were very satisfactory - until the lockdown strangled sales.”

“The message is you can’t be everything for everyone within a vast and complex market such as China, you have to focus on a specific market segment.”

Shipping to Russia "a bit of a nightmare"
The Russian war has had a big impact on the citrus marketing windows for everyone in South Africa but around 80% of South African exporters decided at the end of February not to send to Russia because of the extreme uncertainty around payments and shipping possibilities. Those exporters who decided to take the risk, based upon calculations of the strength of their relationships with Russian buyers (and because for certain counts of Satsuma there's no other home), have been rewarded – although shipping is “a bit of a nightmare”.

Space on the conventional vessel to Russia which at the beginning of the season departed South Africa every two weeks, is oversubscribed. Reefers to Russia will soon move to a weekly service.

“The market turned out to be actually very good because it was undersupplied,” a Limpopo exporter observes. “The Russian Ruble increased in strength as time went on and the cost component, dollar-wise, became more manageable.”

An exporter of Eastern Cape citrus remarks to FreshPlaza that the only market where they’re currently seeing sustainable returns, is, in fact, Russia.

However, by now the message of Russia's undersupply has spread, and the Russian market has started weakening, exporters say.

Impediments braked lemon exports to Middle East
As for the Middle East, lemon exporters had lost a lot of money early season in 2021 because an oversupply of lemon frequently develops.
This year the floods in Durban and unrest in the Eastern Cape acted as regulator of lemon flows also to the Middle East.

The start of the lemon season was very conservative in the Middle East but later when the Eastern Cape couldn’t get going as normal, prices moved upwards a bit. However, at the same time Ramadan started, which conversely and usually slows down market movement and interest.