"Demand that government open roads, if they do not it is likely that 40% of Ecuador's bananas will not be exported”

The ongoing, two week long, mass protest action in the leading banana exporting country, Ecuador, is placing over 40% of the remaining export volume at major risk for the already strained industry. "The first week of losses already amount to over $20 million dollars, with this week’s losses not even counted yet. Over 2 000 containers of bananas and counting could not be packed and shipped due to blocked roads in key production areas," says Richard Salazar, Executive Director of Ecuador's Banana Marketing and Export Association (Acorbanec). 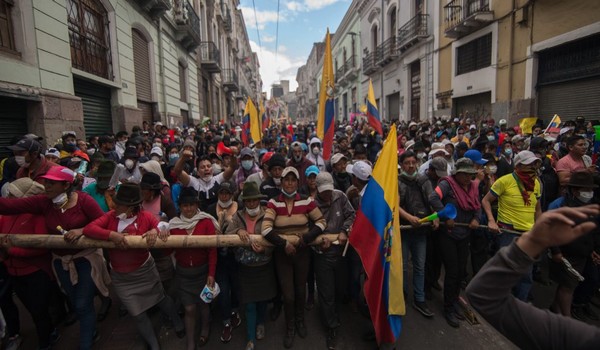 Photo of protesters by Conaie

The country has been rocked by mass action from the Confederation of Indigenous Nationalities of Ecuador (Conaie) who according to them embarked on the protest action on Monday, 13 June, after a series of failed talks with the government.

They have a list of 15 demands from the Ecuadorian government and President that include fixing fuel prices, resolving unemployment, fighting crime and a host of other demands. While at least a hundred people have been arrested, four people have also died with over 120 police officers injured as a result of the protest action according to the government. The widespread protest action forced the closure of roads in the main banana production and export areas in the provinces of Los Rios, Cotopaxi (La Mana), Guayas and El Oro.

Salazar said that, as an industry, they have declared a force majeure. “First, it is a situation of force majeure. We are working but we cannot take the containers to the farms and from there to the ports, therefore we cannot export bananas on a regular basis, because most of the roads are closed. We estimate so far a loss of around US$ 20 million dollars, we still cannot quantify the losses of the current week. That is why we ask and demand that the authorities of the National Government, the Police and the Armed Forces open the roads, because if they do not do so, it is likely that 40% of Ecuador's exportable supply of bananas will not be exported.”

The current ongoing protests are a further blow to Ecuador’s banana sector, which has been struggling since the start of the year. Ecuador exported a total of 126.81 million boxes of bananas in the first quarter of 2022, i.e. 6.44% fewer boxes than the same period of last year, according to figures shared by Acorbanec.

The lack of containers and shipping spaces was also evident between January and March, due to the congestion in important ports, especially in China, and the war between Russia and Ukraine that began on February 24, 2022, which deepened the crisis that the Ecuador's banana sector was already experiencing, as these markets used to account for 25% of the country's banana exports.

Salazar is hopeful that roads will be opened soon to allow the critical movement of containers as well as supplies to and from the farms in the key production areas.