Blueberry acreage in the Italian Campania region grows every year

"We firmly believe in the goodness of the Italian blueberry, which is why every year we increase its production areas by a few hectares; in this way we grow not only in terms of crops, but also in volume," said Pietro Paolo Ciardiello, director of the Italian Coop Sole in Parete, in the province of Caserta. 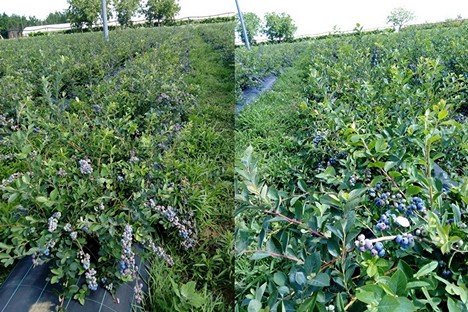 At the cooperative, the small fruit campaign is underway, with raspberries, blackberries and blueberries. "The blackberry and blueberry harvest began a few months ago, while with the raspberries we continued non-stop. We are very satisfied with the commercial performance of the raspberry, given the good demand and interesting quotations. On the other hand, in the case of blueberries, we had some problems in the last month due to the abundant availability of the product on the markets, mainly linked to the presence of Spanish competing product, which clogged the markets for some time; however, the situation has now settled down," explained Ciardiello.

Every year, Coop Sole invests in agronomic and varietal innovations on small fruits as well, with the aim of ensuring high-quality products, protecting the environment and its biodiversity, and making such crops sustainable for producer members. Small fruits are part of the premium range, from the Sole Cooperative, under the Sì Bon brand, and are available from organic and integrated pest management crops.

The netted melon campaign, which will end in September, is also underway as of now. "This year has been a somewhat unusual melon campaign. We had a very positive first phase of the campaign in May, marked by a good market trend. However, in June, all the most significant Italian production areas came into production, and there was an overlap of supply, coming from both southern and from northern Italy. As a result, the oversupply of melon available throughout Italy clogged the market, thus slowing sales.

"We are now at 70 to 75 percent of the production potential, and roughly in line with last year. This year, we are really excited about strengthening organic melon sales not only abroad but also throughout Italy, and especially in the south. Now, given the excessive heat, which is creating some problems for us in terms of for the product in the greenhouses, we will start harvesting in the open field. I believe that melon cultivation cannot do without innovation. We have figured out how to move forward for the next campaign."

Finally, FreshPlaza asked Ciardiello to address the following question. "What is the critical issue that you are experiencing the most? Is there enough water availability to complete the current campaigns?"

The director of Coop Sole replied by saying, "The most critical issue is the labor shortage, which could also affect the upcoming campaigns to some extent. As for water availability, we do not record any problems at the moment. In fact, we have sufficient water reserves to peacefully continue the current production season, since both the cooperative and the producer members are supplied by the Reclamation Consortium of the lower basin of the Volturno River."