"We do sell a lot to the restaurants, but demand is definitely growing from there"

Major Australian fingerlime grower, Green Valley Fingerlimes has noticed an increase in demand for the fruit not just as its domestic customer base increases but also with international buyers as well.

Fingerlimes are an Australian native rainforest tree that naturally occurs as an understorey tree, and owner Jade King says more people are becoming aware of the fruit not only in food service venues such as restaurants, cafes and bars but in the mainstream retail stores for the at-home customer.

"A lot of my sales at the moment seem to be in punnets, so fruit stores are taking them," she said. "Ultimately, I'd like to get them on the shelf near the blueberries and strawberries, that would be a key goal, and the industry needs to develop a little more before that can be achieved. On the demand side, it seems to increase towards the end of the season, when everyone wants them. I am hoping that it will grow more and become more well known, and increase our presence in the bigger supermarkets. We have supplied Coles in Western Australia, and that went well. We do sell a lot to the restaurants, but demand is definitely growing from there, and helped along by television shows such as Masterchef. When I started out telling everyone I grew fingerlimes, no one really knew what I was talking about I really had to explain what they were, but now I don't so much, which is good." 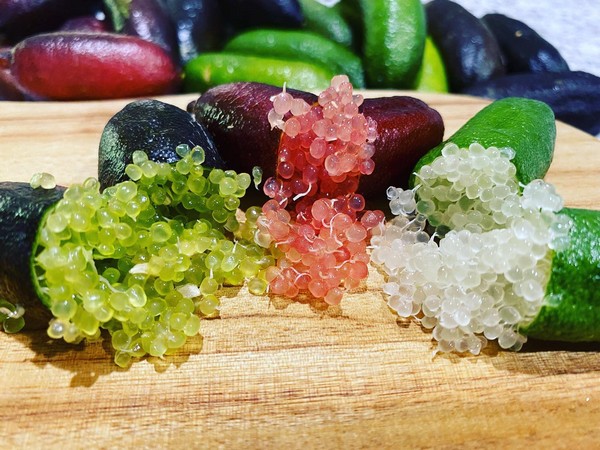 The company started in 2012 and started producing fingerlimes. Green Valley has three varieties; Champagne Red (1200 trees), Chartreuse (600 trees) and is starting to grow Emerald. Ms King says they are suited for most dishes that traditional limes are used in such as salads, desserts and seafood, but they have the advantage of having the textural differences.

"Our primary sales variety is the Champagne Red and we distribute across all major Australian markets," Ms King said. "We export internationally too, but that has reduced a little bit since COVID, but Singapore is still a strong market for us. We also supply to local 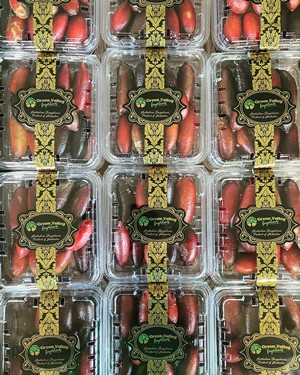 restaurants and direct to chefs and independent supermarkets such as IGA. With the Champagne Red, one of the key aspects is the colour, and it ranges from the champagne through to the red colour. They are a hard-skinned variety, so the shelf life is a bit longer and can last 4-6 weeks in the refrigerator. The chefs tell me they are on the sweeter side of the lime flavour. The Chartreuse is a green-skinned variety, but they break down a bit more and have a shorter shelf life. They have seeds, unlike most of the Champagne Reds, and I describe their flavour as similar to 'lime fizzwizz' (candy), and inside is a clear pearl. Emerald is dark-skinned and has green pearls on the inside. So, we have different colours." 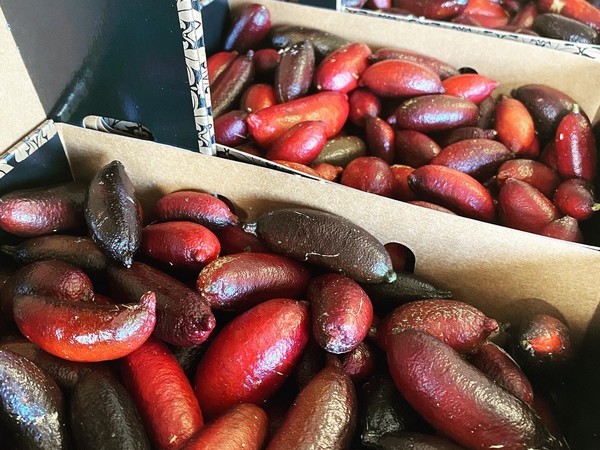 Green Valley Fingerlimes is based in the beautiful Sunshine Coast Hinterland region of Beerwah. The fruit is grown on a chemical-free mixed farm, and apart from seasonal fruits and vegetables, specialising in finger limes and ginger, it also has Brangus beef cattle and Wiltipoll sheep. Fingerlimes have a season of around six months in Australia, from January to June.

"I can extend the season a bit if I can manipulate flowering a bit, but this year has been quite difficult for everyone," Ms King said. "We still have plenty of fruit on at the moment, and we will extend it a bit longer. In the off-season, we can still get some supply off for some of the main chefs which I supply, so I can maintain them year-round. I will be overseas to research how they are grown internationally. Despite them being native to Australia, they are quite well grown in other parts of the world too, and there is a fair bit of research happening. So, I will be heading off in the next two weeks to investigate that. Hopefully, we can own it as Australian and keep its identity. Demand overseas is definitely growing; they have alternate seasons, and they have a lot of production happening too."