One of the youngest fruit growing grandsons from the original Paulin family in Central Otago, has created his own cherry orchard, along with a state-of-the-art packhouse.

3 Kings Cherries managing director, Tim Paulin, has spent the past three years clearing land on the foothills of the Dunstan Mountains north of Clyde for his new 40ha orchard.

His new packhouse can process up to 1000 tonnes and has a temperature-regulated processing room, as well as full staff amenities. Built by Prospec Structures, the packhouse is made of insulated panels imported from Germany, which have a food grade paint finish, and hot dipped galvanised structural steel framing. 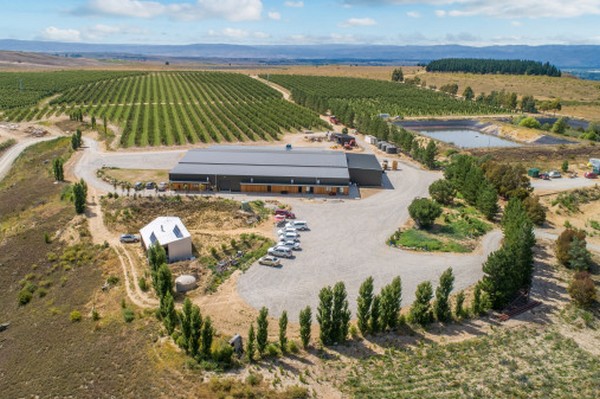 3 Kings Cherries was named by Tim’s uncle Peter, and the name relates to a trio of rocky schist outcrops that sit directly to the east of the orchard overlooking Earnscleugh.

The Paulin family celebrated a century of harvesting summerfruit late last year. Tim is a grandson of Robert Noel Paulin. His brother Dennis is co-owner of Dennys Orchard, and older cousins (Peter’s sons) Kevin and Raymond, with their wives, own and operate the Clyde Orchards.

There are three sisters in the mix as well, and Tim’s eldest sister, Kathy Forrest, bought the family orchard from their father Des.

Longevity seems to run in the family. Des is 96 and still lives in Alexandra, as does his brother Frank; and another brother Brian, is in Wellington).

Tim always wanted to own his own orchard despite his father doing his best to dissuade him, saying the long hours and time away from the family took its toll.

“But it’s all I know and have known since I was fifteen.”

Starting his tertiary education at Lincoln University, Tim studied a Diploma in Horticulture and Management and came back home to Alexandra to work on Clyde Orchards, belonging to his cousin, managing the Bannockburn operation for 18 years.

Looking for a new experience, Tim headed to Canada and worked on apple and cherry orchards, as well as horse ranches in Washington State. Coming back home, he crossed paths with nurse Tisha McCaw at an emergency call-out where Tim was part of the fire brigade. They got married, and the couple now have four children.

Tim is also the operations manager for Fortune Fruit, but a few years ago he started looking to find a shareholding in the industry and gain more control over his orcharding life.